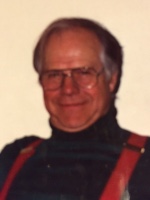 BRUNSWICK – Ernest D. “Jim” Pirman, age 86, of  Brunswick, died peaceably at home with his daughters on Monday, November 9, 2015. Born in Brooklyn he was raised in Brooklyn and the Adirondacks of NY and Bradenton FL. Jim lived most his adult life in Brunswick with his dogs Pucky, Basil, Dumper, Blackie, and Brownie; and many friends. His pride and joy were his three daughters, Nancy, Kimball, and Heidi.

Jim graduated from Brooklyn Polytechnic Preparatory County Day School for Boys ’45, Princeton University ’49 (where he was a member of Key and Seal, and excelled in competing on the wrestling team), and SUNY at Albany ’70.

He had many stories about his service on the U.S.S. Sabine during the Korean War. He was employed by H.N. Whitney Goadby as an investor. Earning his MSW, he was a caseworker for Renssalaer County Dept. of Social Services, and later Director of New York State Alternative to Incarceration Program for Youth 18 Years and Under which was his most rewarding job keeping kids out of the justice system.

Jim was a long time member of the ADK and enjoyed hiking the Adirondacks, chaired the whitewater committee for many years, and traveled above the Arctic Circle and to Alaska. The Adirondacks were his paradise.

He was friends of RPI Hockey and an avid NY Jets and Mets fan.

Jim was a friend of Bill W for 55 years.

Jim was predeceased by his parents, Ernest J. Pirman and Ruth Dickinson Pirman. He is survived by his daughters, Nancy Pirman-Weiss (Mitchell Weiss) of Carlisle, Mass., Kimball Pirman Stewart (David) of South Hill, Va., and Heidi P. DeGroff (Jean Benoit) of Troy; his grandchildren Katrina Weiss (Katy Salka), Adam Weiss, Brain Stewart, Hunter Coram (Brittany), Weston Stewart, Carlson Stewart, and Timothy DeGroff; and his great-grandchildren Hunter and Jasper; his sister, Ruth McCrea of East Hampton; and by many nieces and nephews. He was predeceased by his sisters, Marjorie Cauchois and Louise Root.

A memorial service will be celebrated in the Hans Funeral Home, 1088 Western Ave., Albany, Sunday afternoon at 1:00pm.  Relatives and friends are invited, and may call at the funeral home Sunday beginning at 11:00am.   To leave a message of condolence for the family or obtain directions to the funeral home, please visit www.HansFuneralHome.com.

Offer Condolence for the family of Ernest D. “Jim” Pirman

A Certified Celebrant is a person who is trained and certified to meet the needs of families during their time of loss.  A Celebrant serves by providing a funeral service that is ...  END_OF_DOCUMENT_TOKEN_TO_BE_REPLACED