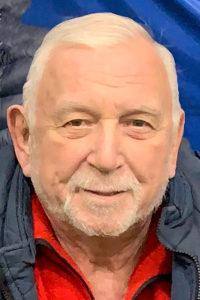 ALBANY – Charles “Charlie” Phillip Rougle, Ph.D., aged 73, died on May 17, 2020, in Albany, New York, after a year-long struggle with leukemia. He passed peacefully with his wife and daughter by his side at Albany Medical Center.

Charles greeted his parents, Rose Mary and Jake, at St. John’s Hospital, in Helena, Montana on September 4, 1946. He grew up in Helena where he developed a love for the outdoors, fishing, and playing the cello. At the age of 14 he joined the Helena Symphony Orchestra and was featured as a soloist when he was 16. When in high school, thanks to Montana’s first teacher of Russian, Kathleen Ramey, he studied Russian, the subject that would shape the rest of his life.

Graduating from Helena Senior High School in 1963, Charles spent one year at Montana State University before being awarded a scholarship to finish his B.A. in Russian Language at DePauw University, in Greencastle, Indiana. In 1967, he graduated magna cum laude and was awarded a fellowship to Indiana University in Bloomington. That summer he visited the Soviet Union as part of the university’s Russian studies program and met Eija Kivilinna in Leningrad. A native of Finland, Eija, also studying Russian at Helsinki University, was a summer tour guide for Finnish tourists in the Soviet Union. A year and a steady stream of letters later, Charles and Eija were married in Helsinki. Last June, they celebrated their fifty-first wedding anniversary.

In 1969 Charles earned his M.A. in Russian Language and Literature from Indiana University. He spent the next 16 years in Sweden due to his opposition to the Vietnam War. When Solzhenitsyn received the Nobel Prize in literature in 1970, Charles served as one of his interpreters. In 1977 he earned his Ph.D. in Slavic Languages and Literatures from the University of Stockholm, focusing his research and writing on the early Soviet period. From the late 1970s until the mid-1980s he lectured at the Universities of Stockholm and Uppsala. At the same time, he began a parallel career as a translator and editor from Russian and Swedish into English. Charles continued to work in this field to the end of his life, compiling an extraordinary record of achievement. As his colleague Timothy Sergay wrote upon learning of Charles’s passing,

The field of Russian translation, especially academic translation, has lost a prolific and scrupulous practitioner of translation from multiple languages, who for many years gave an authoritative English voice to the latest achievements in Scandinavian Slavic studies. He was also a scholar of Isaak Babel, modernism, utopianism, science fiction, and translation itself; and the translator of novels by Valentin Kataev (The Embezzlers, trans. 1975) and Aleksandr Bogdanov (Red Star, trans. 1984) and intricate culturological works by Boris Groys and Magnus Ljunggren.  Most recently he translated a number of studies on contemporary Russian art for the Garage Museum of Contemporary Art in Moscow.

In 1985, Charles accepted a position as a professor of Russian language and literature in the Department of Slavic Languages at the State University of New York, Albany. Here, he taught courses on the theory and practice of translation in the newly-established post-M.A. program “Certificate of Advanced Study in Russian Translation,” as well as various M.A.- and B.A.-level courses. For many years he served as director of undergraduate studies in the Slavic Department (later reorganized as a Russian program), and ran the Russian University in the High School program, which helped support the teaching of the Russian language in schools in the Capital District and beyond. His university service included such challenging stints as chair of the combined Department of Germanic and Slavic Languages and Literatures, interim chair of the Department of Hispanic and Italian Studies, and also chair of the newly formed Department of Languages, Literatures and Cultures. His contributions were recognized with a University at Albany Excellence in Academic Service Award in 2001–2002. Awarded a Fulbright Teaching Fellowship, he spent the 2005–2006 academic year in Moscow, where he served as academic co-director of the Center on Russia and the United States at Moscow University. After nearly thirty years at the University at Albany, Charles retired in 2012.

Charles had a passion for learning. A talented polyglot, with near-native fluency in Russian, Swedish and Finnish, he taught himself to read and speak (with varying degrees of fluency), German, French, Spanish, Italian, Polish, Ukrainian, Romanian, and Slovenian. Inspired by the fact that his paternal grandparents emigrated from Slovenia to East Helena in 1894, he spent the last three summers in Ljubljana, studying Slovenian, researching his family tree, and reconnecting with his relatives, who became very dear to him.

A mechanic’s son, Charles also enjoyed using his hands to work with wood, play the cello, garden, and cook. (His grandchildren, Erik and Oskar, refused to eat any other bread than “Grandpa’s Bread”!) He became proficient in the art of intarsia, a variety of wood inlaying that requires carving and assembling small pieces of exotic wood into bas-relief pictures. He won a number of top regional prizes for his work. A talented cellist, upon retiring he returned to his music, studying cello privately, attending summer workshops such as the Bach Cello Suites Workshop, and playing in UAlbany’s University Symphony Orchestra.

Charles was a devoted husband and father, and treasured his role of Grandpa to Erik and Oskar. He was thrilled to see them grow and develop, and would proudly share their latest photos with his friends. He would drive across the city daily to meet his “favorite chipmunk” and “buckaroo” at the school bus stop and was one of their biggest supporters in everything they did. At every soccer game Grandpa was there.

He will be deeply missed by all of us, as well as by a wide circle of colleagues and former students in this country and in Europe. His courage and spirit, his integrity and wit, his honesty and generosity will live on in our hearts.

Due to restrictions necessitated by COVID-19, funeral services will be privately held. Charles will be laid to rest at the Albany Rural Cemetery.

Special thanks to the doctors, nurses, and staff at New York Oncology Hematology at Albany Medical Center. Those who wish, may make a memorial contribution to the Leukemia & Lymphoma Society https://www.lls.org, Cellospeak  https://www.cellospeak.org/donate/ or Northeastern Woodworkers Association https://woodworker.org/.  To leave a message of condolence for the family, please visit https://www.hansfuneralhome.com/charles-phillip-rougle-ph-d/

Offer Condolence for the family of Charles Phillip Rougle, Ph.D.

A Certified Celebrant is a person who is trained and certified to meet the needs of families during their time of loss.  A Celebrant serves by providing a funeral service that is ...  END_OF_DOCUMENT_TOKEN_TO_BE_REPLACED