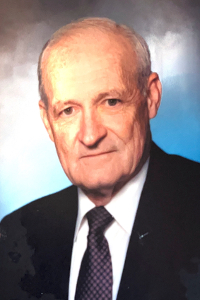 GLOVERSVILLE – Dr. Arthur K. Brelia, a retired, long-time Gloversville NY obstetrician – gynecologist, died at the Albany Stratton VA Hospital on December 29, 2022 following a long illness. Dr. Brelia served in the Navy during WW II and the Air Force during the Korean War. From 1953-54 he was the Chief of Obstetrics- Gynecology at the U.S. Air Force Base in Coca Beach FL.

After completing his service at Patrick Air Force Base in FL, Dr. Brelia opened his first practice in Albany and had privileges at Albany Medical Center as well as St. Peter’s Hospital and Brady Maternity Hospital in Albany.

Dr. Brelia was an avid, life-long golfer who finally recorded an official hole-in-one at Gloversville’s Kingsboro Golf Course in August 1995. His friends and fellow physicians, Dr. David Handron and Dr. Daut Gjoni, witnessed the score which was reported in the local Leader-Herald.

Dr. Brelia’s other life-long passion/avocation was harness racing. He owned, trained, and drove many standard bred horses over the years, compiling quite a record of success. His best horses, “Go Yates” and “Go Gardner,” garnered some of the prestigious awards. In the spring of 1991, Dr. Brelia qualified as the U.S.A. Senior Representative in that year’s series of International Harness Races. Those 1991 races were held in racing venues all over France, including at Vincennes in Paris. Prior to her death, his wife, Agnes “Kel,” was an enthusiastic partner/owner in these horse racing endeavors.

Dr. Brelia was pre-deceased by one of his daughters, Kristine Brelia Smith, and his son, Keith Arthur Brelia. His daughter, Karen Brelia Corcoran of Baltimore MD survives him, along with 2 sons-in-law, Richard J. Corcoran of Baltimore MD and Robert D. Smith of Duanesburg NY and Ocala FL. Also surviving are his 3 grandchildren, Richard J. Corcoran Jr of Cincinnati OH; Brian A. Corcoran of Arlington MA; and Kelly Smith Sturman of Oldwick NJ; as well as 9 great-grandchildren and several cousins, including Linda Jandreau Seymour and her husband, Ray Seymour, of Clifton Park NY. Burial arrangements will be finalized at a later date.  To leave a message of condolence for the family, please visit www.HansFuneralHome.com.

Offer Condolence for the family of Arthur K. Brelia, M.D.

A Certified Celebrant is a person who is trained and certified to meet the needs of families during their time of loss.  A Celebrant serves by providing a funeral service that is ...  END_OF_DOCUMENT_TOKEN_TO_BE_REPLACED