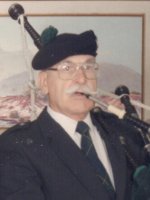 WESTMERE – Wyman Albert Soule, 92, of Westmere, died Tuesday, January 1, 2013 at the Albany County Nursing Home.  Mr. Soule was born in Palmyra, New York.  He was employed by Curtis Wright Aircraft in Buffalo prior to entering service in the U.S. Navy during World War II.  He returned to Curtis Wright after the war, and then attended Rensselaer Polytechnic Institute in Troy, graduating in 1951.  He then moved to Long Island and worked as an aeronautical engineer for Grumman Aircraft Corp.  In 1969 he moved his family to Albany, and began work for the NY State Dept. of Transportation as a civil engineer until retiring in 1989.  He was a member of the First Church in Albany, and a past Master of the Wadsworth Masonic Lodge.  He also enjoyed bagpiping with the Tara Hall Pipe Band of Troy, and spent time (in his younger days) flying gliders with the Long Island Soaring Society.

Mr. Soule was predeceased by his wife Marjorie.  He is survived by his son Wyman Thayer Soule of Westmere; his daughter Mindy Soule of London, Ontario; and his grandchildren Margaret, Melinda and Molly Soule-Brandon.

Funeral services will be held in the Hans Funeral Home, 1088 Western Ave., Albany, Thursday morning at 10:00am.  Relatives and friends are invited, and may call at the funeral home Wednesday from 6-8 pm.  Interment will be in the Village of Palmyra Cemetery, Palmyra, NY, at a later date.  The family suggests memorial contributions to The Alzheimers Association of Northeastern New York, 4 Pine West Plaza #405,   Albany, NY 12205.  To leave a message of condolence for the family, send a sympathy card, or obtain directions to the funeral home, please visit www.HansFuneralHome.com.

Offer Condolence for the family of Wyman A. Soule

A Certified Celebrant is a person who is trained and certified to meet the needs of families during their time of loss.  A Celebrant serves by providing a funeral service that is ...  END_OF_DOCUMENT_TOKEN_TO_BE_REPLACED