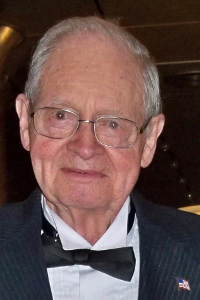 GUILDERLAND – William James, Jr., 96, died peacefully on Saturday, June 1, 2019 surrounded by his loving family. He was the son of the late William and Catherine James and the husband of 67 years to his loving wife Elizabeth Jane Sattler James. He was predeceased by his brother Morgan James. William was born in and lived his entire life in Guilderland. He graduated from Albany High School in 1943 and served proudly in the Army during World War II, surviving the D-Day invasion.

William spent his life in service to his community. He was a life member volunteer fireman at the North Bethlehem Fire Dept for 60 plus years, Life member of the VFW and American Legion. He faithfully decorated graves every Memorial Day at the Prospect Hill Cemetery for over 60 years. When he wasn’t doing volunteer work he enjoyed gardening and flowers. He was a member of the Albany African Violet Society.

William spent most of his career at the Voorheesville Depot working for the Federal Government as an inspector. After retiring he drove a school bus for the Guilderland Central School District.

Relatives and friends are invited to call at Hans Funeral Home 1088 Western Ave on Friday, June 7th from 4-8 p.m.  A celebratory service will be held at the Funeral Home on Saturday at 10:00 a.m. followed by a graveside service at Prospect Hill Cemetery with military honors.

Donations in lieu of flowers may be made in William’s name to the Fisher House (for Veterans and their families), 113 Holland Ave., Albany, NY 12208.  To leave a message of condolence for the family or obtain directions to the funeral home, please visit www.HansFuneralHome.com.

Offer Condolence for the family of William James, Jr.

A Certified Celebrant is a person who is trained and certified to meet the needs of families during their time of loss.  A Celebrant serves by providing a funeral service that is ...  END_OF_DOCUMENT_TOKEN_TO_BE_REPLACED