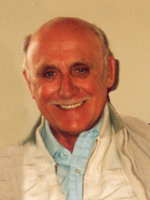 ALBANY – William Hoogkamp, 91, of Albany, passed away on Thursday, July 20, 2017, at the Schuyler Ridge Nursing Home in Clifton Park.  Bill was born in Colonie, the son of the late Marinus and Anna Roehr Hoogkamp.  He lived in the area all his life.  He served in the U.S. Navy during World War II, and was employed as a manager for Educator Foods of Albany, and by several other businesses.

Bill was predeceased by his wife Alice Bannister Hoogkamp.  He is survived by his siblings Helena Warner (Richard) of Petersburgh, Faith Boel (Garry) of Halfmoon, Wesley Hoogkamp (Chris) of Johnson City, TN, and Daniel Hoogkamp (Janet) of Asheboro, NC; his sisters-in-law Mary Hoogkamp of Latham, and Elaine Hoogkamp of Colonie; and by many nieces and nephews and great nieces and nephews.  He was also predeceased by his brothers Preston, Richard, Alvin, Paul, and Stanley Hoogkamp.

Funeral services will be held at the Hans Funeral Home, 1088 Western Ave., Albany, Monday at 2:00 p.m.  Relatives and friends are invited, and may call at the funeral home Monday afternoon prior to the service from 1-2 p.m.  Interment will be in St. John’s Lutheran Cemetery, Colonie.  To leave a message of condolence for the family, or obtain directions to the funeral home, please visit www.HansFuneralHome.com.

Offer Condolence for the family of William Hoogkamp

A Certified Celebrant is a person who is trained and certified to meet the needs of families during their time of loss.  A Celebrant serves by providing a funeral service that is ...  END_OF_DOCUMENT_TOKEN_TO_BE_REPLACED