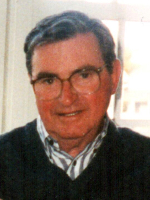 VOORHEESVILLE – William H. “Bill” Allen, Jr., 90, of Voorheesville, passed away on Sunday, January 29, 2017 at Our Lady of Mercy Life Center in Guilderland.  Bill was born in Albany, the son of the late William H. Allen, Sr. and Helen Huth Allen.  He lived in the area all his life.  He was a graduate of Christian Brothers Academy Class of 1944, and served in the U.S Navy during World War II aboard the USS Columbus.  Bill was a 1950 graduate of Siena College, and entered the family business Allen Carpet Cleaning where he was employed for many years.  He also operated a carpet sales showroom on Central Avenue in Albany.  After his retirement from the carpet business, he was employed by the New York State Lottery as an auditor.  He was a member of the Knights of Columbus, and also served for many years on the Albany Port Commission, including service as Chairman of the Commission.  Bill was a very talented and accomplished baseball player.  He also loved the game of golf which he enjoyed all his life, and he was a devoted fan of the New York Yankees and the New York Giants.

Bill was predeceased by his wife Mary Joan Reilly Allen in 1985, and by his wife Alice Marie Wilson Allen in 2012.  He is survived by his sons William H. Allen, III of Albany, John Allen (Cynthia) of Voorheesville, James Allen (Janet) of Union, KY, Thomas Allen of Denver, CO, Robert Allen (Kathleen) of Wilmington, MA, and Terrance Allen (Lisa) of Wake Forest, NC; his grandchildren James, Gregory, Shane, Morgan, and Brittany Allen; and his great granddaughter Kali Allen.  He was also predeceased by his sister Jane C. Allen Gobel, his grandson Justin, and his great granddaughter Aryanna.

A Mass of Christian Burial will be celebrated Friday morning at 10:00 am in the Parish of Mater Christi, Hurst Ave. & Hopewell St., Albany.  Relatives and friends are invited.  There will be no calling hours.  Interment will be in St. Agnes Cemetery, Menands.  Arrangements have been entrusted to the Hans Funeral Home, Albany.

In lieu of flowers, memorial contributions may be made to Catholic Charities of the Diocese of Albany,

A Certified Celebrant is a person who is trained and certified to meet the needs of families during their time of loss.  A Celebrant serves by providing a funeral service that is ...  END_OF_DOCUMENT_TOKEN_TO_BE_REPLACED