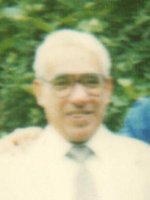 ALBANY – Tindaro O. Alfano, 79, passed away unexpectedly Saturday, June, 23, 2012.  He was born on July 10, 1932 to the late Bessie and Joseph Alfano in Albany, where he lived most of his life.   Tindaro entered the U.S. Air Force at 16 and served for four years during the Korean Conflict separating from the service at the Limestone Base in Maine.  Upon leaving the armed services, Mr. Alfano’s principal employment for over 40 years was as a self-employed salesman for many retailers and wholesalers.  He sold jewelry, consumer items, and leather jackets.  Mr. Alfano was the operator of Alfa Imports of Albany, Rand Jewelers of Boca Raton, FL and Pier 1 Imports of Troy during this period.  Although Mr. Alfano liked his work his real happiness came from being with his wife and son and telling war stories with his many friends over the years in the taverns that he patronized.  Mr. Alfano’s hobbies included reading, politics, business, and sports.  He was a voluminous reader and possessed an outstanding memory.  Mr. Alfano will be remembered mostly for his generosity, good-nature, wit, and ability to interact with a diverse array of people.

Mr. Alfano was predeceased by his loving wife whom he adored for 37 years, Patricia McGuckin Alfano.  He is survived by his loving son Matthew T. Alfano of Clifton Park; his sisters Josephine Shea (Robert) of Latham, and Mary Jean Alfano of Cary, NC; his brother Charles Alfano of Watervliet; and by nieces, nephews, numerous cousins, great-nieces and nephews.  He was also predeceased by his nephew Anthony Alfano, and brother Orazio Alfano.

Funeral services will be held in the Hans Funeral Home, 1088 Western Ave., Albany, Monday evening at 6:00pm.  Relatives and friends are invited, and may call at the funeral home on Monday prior to the service beginning at 4:00pm.  Interment will be held privately at a later date.  The family suggests memorial contributions to the American Heart Association, 440 New Karner Rd,  Albany, NY 12205.  To leave a message of condolence for the family, send a sympathy card, or obtain directions to the funeral home, please visit www.HansFuneralHome.com.

Offer Condolence for the family of Tindaro O. Alfano

A Certified Celebrant is a person who is trained and certified to meet the needs of families during their time of loss.  A Celebrant serves by providing a funeral service that is ...  END_OF_DOCUMENT_TOKEN_TO_BE_REPLACED