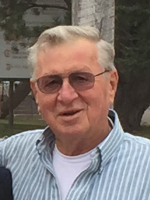 GUILDERLAND – Thomas J. Kuczenski died on Wednesday, December 14, 2016, at home with his wife by his side.  Tom was born August 17, 1939 in Fredonia, the son of the late Irene Mixtacki and William Kuczenski.  He was employed by National Fuel Gas for forty-seven years, retiring from the Dunkirk service center in February 2005.  He was a member of the Fredonia Beaver Club, American Legion Post 59 of Fredonia, the Northern Chautauqua Conservation Club of Dunkirk, the Dunkirk Exempt Fireman’s Association, the First Ward Falcon Club of Dunkirk, the Kosciuszko Polish Home Association of Dunkirk, member of the Fredonia Volunteer Fire Department Fenner Hose Company for over 30 years,  and was past president and member of Lakeshore Street Rods of Dunkirk.

Tom is survived by his wife Pamela Zyniecki Kuczenski, who he married on October 1, 2005; his sisters Eleanore Pacos  and Delphine Jusko (Walter) of Fredonia; his brothers Ronald Kuczenski (Cindy) of Jamestown, and Donald Kuczenski (Kathleen) of Pittsburgh, PA; his daughter-in-law Phyllis Butts of Fredonia; his grandsons Ryan Mourer (Jamie) of Fredonia, and Christopher Mourer of Cannonsburg, PA; two great grandsons; many nieces and nephews; his life long friend of over 60 years Charlie Baker of Dunkirk; his special friends Dan Salerno of Dunkirk, and Kay Shipman of Ithaca and Joe Seminatore of Fredonia.  In addition to his parents, Tom was predeceased by his brother William Kuczenski, who had lived in Wolcott and his brother-in-law Leo Pacos Sr., and nephew Brian Pacos who had both lived in Fredonia.

Tom had a special place in his heart for cars and all types of animals especially his constant companion, Muffin. He was a man of many talents. Tom was always ready to jump in and give a helping hand, no questions asked.

A Mass of Christian Burial will be celebrated in Christ the King Church, 20 Sumter Ave., Guilderland on Monday morning at 10:00 a.m.  Relatives and friends are invited, and may call at the church chapel Monday morning before the mass beginning at 9:00 a.m. A memorial service and Interment will be held in the spring in Fredonia, N.Y.  Those wishing to remember Tom in a special way may send a contribution to either Make-A-Wish of Northeastern, NY at 3 Washington Square Albany, NY 12205 or Guilderhaven, Inc. at 6655 Route 158 Altamont, NY 12009.  To leave a message of condolence for the family, please visit www.HansFuneralHome.com.

Offer Condolence for the family of Thomas J. Kuczenski

A Certified Celebrant is a person who is trained and certified to meet the needs of families during their time of loss.  A Celebrant serves by providing a funeral service that is ...  END_OF_DOCUMENT_TOKEN_TO_BE_REPLACED