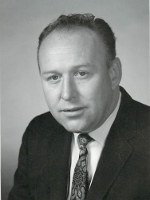 ALBANY – Thomas G. O’Brien, 88, of Albany, passed away on Thursday, Oct. 13, 2016, at the Hospice Inn in St. Peter’s Hospital.  Mr. O’Brien was born in East Jewett, NY, and was a U.S. Army Korean War combat veteran. He was a longtime employee of IBM in Poughkeepsie, Kingston, and East Fishkill, serving as an advisory quality engineer. He was awarded more than a dozen patents in the chemical engineering field, and was a pioneer in developing some of the technologies we enjoy today. He was past commander of the Town of Ulster Joyce-Schirick VFW Post 1386, as well as a VFW life member.

Calling hours will be Monday, Oct. 17, from 4-7 p.m. at the Hans Funeral Home, 1088 Western Ave., Albany. A Mass of Christian Burial will be celebrated at 9 a.m. Tuesday in All Saints Catholic Church, 16 Homestead St., Albany (behind CVS). Interment will be held privately at a later date.  The family suggests memorial contributions may be made to the Community Hospice Inn, 315 S Manning Blvd, Albany, NY 12208.  To leave a message of condolence for the family or obtain directions to the funeral home, please visit www.HansFuneralHome.com.

Offer Condolence for the family of Thomas G. O’Brien

A Certified Celebrant is a person who is trained and certified to meet the needs of families during their time of loss.  A Celebrant serves by providing a funeral service that is ...  END_OF_DOCUMENT_TOKEN_TO_BE_REPLACED