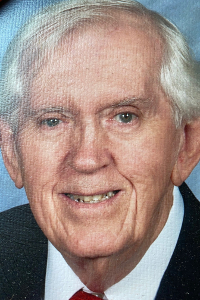 GUILDERLAND —Thomas E. Baker, 92, formerly of Seneca Falls, NY, died peacefully on Monday, September 28, 2020 at his home at Atria Guilderland. He was a music teacher, active volunteer, friend, and faithful follower of Christ.

Tom was born June 19, 1928, the 12th of 14 children, many not surviving childhood, born to William and Belinda Mary (Ford) Baker in Waterloo, NY. He is survived by his brother, Charles (Chuck) Baker, his nephews, Martin Knapp and Gregory Knapp, his cousin, Mary Beth Stowell, and countless friends who became family.

Tom’s childhood home of Seneca Falls was the model for Bedford Falls in the Christmas classic film, It’s a Wonderful Life, and he believed he lived a wonderful life. His musical family attended Catholic Church masses in the closely-knit town where he played in school bands and in Wayne Guy’s Orchestra dance band. He graduated from Mynderse Academy in 1948.

Tom received a bachelor’s degree in Arts from Fredonia State Teachers College in 1950, and a master’s degree in 1952. He was drafted into the Army, where he spent a year in Texas as a French horn musician in the 1st Army Division Band before being sent to Okinawa, Japan.

He became a music teacher in the Voorheesville Central School District in 1953, first in all grade levels and then in the elementary school, until retiring in 1983.  He taught band and vocal groups and directed school musical performances. Students and parents often reminisced with him. Tom was an avid downhill skier known for his love of snow days.

Tom was a member of the Board of Directors and Secretary of the Men’s Garden Club of Albany, where he co-organized and taught two decades of weekly indoor hands-on gardening classes for adults and children at the Center for Disability Services in Albany.

For 21 years he taught Red Cross adult swimming classes at SUNY Albany. He assisted patients attending church services at Our Lady of Mercy nursing home from 1985-2019.  He also sang many years in the Albany area Festival Chorus, a joint ecumenical choir of 40 choirs.  In 2018, he won the Annual Senior Lifetime Achievement Award for his extensive community volunteerism.

He was a lay minister at Christ the King, Guilderland, where he was an enthusiastic weekly greeter at two worship services, a Garden Committee member, Bereavement Committee choir member, and visitation minister. He also attained the Third Degree in Knights of Columbus at Christ the King, where his many communities appreciated his warmth and cheerful spirit.

Tom would like to thank his many friends, especially Greg and Diane Stevens, Russ and Maria Greenman, Christ the King visitation ministers, and the staff at Atria Guilderland for their continued love and support. All made his life exceptionally wonderful.

Donations in Tom’s memory may be made to Men’s Garden Club of Albany, 25 Worthman Lane, Rensselaer, NY 12144.  To leave a message of condolence for Tom’s family and friends, please visit www.HansFuneralHome.com .

Offer Condolence for the family of Thomas E. Baker

A Certified Celebrant is a person who is trained and certified to meet the needs of families during their time of loss.  A Celebrant serves by providing a funeral service that is ...  END_OF_DOCUMENT_TOKEN_TO_BE_REPLACED