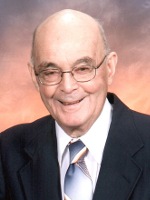 ALBANY – Theodore J. Beebe, 88, of Schenectady, died Wednesday, June 12, 2013 at his home.  Mr. Beebe was born in Albany, but lived in Schenectady and Altamont for many years as well as in Hendersonville, TN.  He was a graduate of Mont Pleasant High School in Schenectady, and served as a sergeant in the Army Air Forces during World War II.  He later served during the Korean War as a 2nd lieutenant in the Air Force Inspector General’s Office.  He was a graduate of Rensselaer Polytechnic Institute, and worked as a design engineer for General Electric Co. Small AC Motors in both Schenectady and Nashville, TN.  He was a communicant of All Saints Catholic Church in Albany, a member and officer of the AARP Chapter 1607 for many years, Assistant State Director of the AARP, a Schenectady County 4-H Leader, and a member of the Schenectady 2000 Vale Park Committee.

Mr. Beebe was predeceased by his wife of over 63 years, Laura Keenholts Beebe, in 2011.  He is survived by his loving children Arnold K. Beebe (Diane) of Schenectady, James R. Beebe (Donna) of Delanson, Theodore J. Beebe, Jr. (Susan) of Saratoga Springs, and Faith M. Beebe of Albany; his brother John Chester Beebe (Joan) of California; his half brother Edward Beebe (Theresa) of New York; his half sister Carolyn Clitherow (Michael) of Pennsylvania; his step sister Etta Gray of New York; his half brother’s wife Georgi Beebe; his step brother’s wife Joan Conlin; his grandchildren Nicholas (Michele), Jarrod, Heather, Shane, and Katlyn; four great grandchildren; and several nieces and nephews.  He was predeceased by his brother James Edward Beebe, Jr.; his half brother Joseph Beebe; and his step brothers Peter Lapishka and Thomas Conlin.

Funeral services will be held in the Hans Funeral Home, 1088 Western Ave., Albany, Tuesday morning at 8:15, and from there to All Saints Catholic Church, Homestead St., Albany at 9:00.  Relatives and friends are invited, and may call at the funeral home Monday from 4-7 p.m.  Interment will be in Fairview Cemetery, Altamont.  The family suggests memorial contributions to Community Hospice of Schenectady, 1411 Union St, Schenectady, NY 12308.  To leave a message of condolence for the family, send a sympathy card, or obtain directions to the funeral home, please visit www.HansFuneralHome.com.

Offer Condolence for the family of Theodore J. Beebe

A Certified Celebrant is a person who is trained and certified to meet the needs of families during their time of loss.  A Celebrant serves by providing a funeral service that is ...  END_OF_DOCUMENT_TOKEN_TO_BE_REPLACED