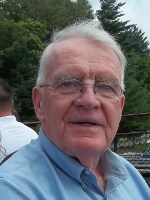 MECHANICVILLE – T. Matthew Donnelly, 74, passed away peacefully on January 7, 2014, at his home after a long illness, while under the devoted care of his wife, Karen, and Community Hospice of Saratoga.

Matt was born on October 8, 1939, as the only child of Thomas and Mary (Conway) Donnelly in Port Leyden, NY.  Matt grew up and attended school in Rye, NY.  Following high school Matt attended Nichols Junior College before entering the US Army, in which he served 3 years.  Upon his honorable discharge Matt attended Wanakena Ranger School prior to entering the NYS Troopers, from where he retired after 29 years of service.  Following his retirement from the NYS Troopers Matt worked 16 years for AKAL Security as a Court Security Officer in the federal courts in Albany, NY until ill health forced his retirement in 2011.

In addition to Karen, his wife of 27 years, Matt is survived by his daughters Jennifer (husband Douglas) and Megan (husband Alex) and a granddaughter Daisy, all of whom he loved and missed dearly. Matt was also survived by step-children Stacy (husband Chris) and Michael (wife Kelly), step-grandchildren Mitchell, Gary, Dana, Logan and Paige, brother-in-law Richard (wife Sandy) and step-niece Lindsay.  Matt was further survived by a special cousin Leslie and her family whom he cherished.  In addition to being predeceased by his parents, Matt was also predeceased by a step-granddaughter, Ashley, in 2004, and close childhood friend, Mike Cronin, in 2013.

In keeping with Matt’s wishes his body has been donated as an anatomical gift to Albany Medical College.  A memorial service will be planned in the spring.  In honor of Matt’s lifelong love of all animals donations may be made to Purrfect Companions, 628 N Pearl Street, Menands, NY 12304 or to an animal rescue of one’s choice.

Offer Condolence for the family of T. Matthew Donnelly

A Certified Celebrant is a person who is trained and certified to meet the needs of families during their time of loss.  A Celebrant serves by providing a funeral service that is ...  END_OF_DOCUMENT_TOKEN_TO_BE_REPLACED