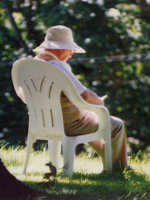 TROY – Sydney Ross, Emeritus Professor of Colloid Chemistry at Rensselaer Polytechnic Institute, died peacefully in his sleep of natural causes on December 4, 2013. Born July 6, 1915, in Glasgow, Scotland, he was the son of Jack and Lia Blint Ross. In 1933, he followed his father, who was extending the family distillery business to North America, to Montréal. In 1936, he graduated from McGill University with first class honors, concentrating on analytical chemistry with William Clark. In 1940, he earned a PhD in chemistry from the University of Illinois, studying x-ray diffraction under George Clark and completing a dissertation on foams and brewing that derived from Clark’s consulting work with the Schlitz Brewing Company.

From a faculty appointment at Monmouth College, Illinois, Ross was called to postdoctoral study under James McBain at Stanford University, investigating the foaming of aircraft-lubricating oil and other military subjects. During this time he matured into a physical chemist with a special interest in colloidal phenomena, identifying himself henceforth as a colloid chemist.

In 1945, when McBain left Stanford, Ross took an appointment at the University of Alabama at Tuscaloosa. Moving the following year to the Clinton Laboratory at Oak Ridge to work on gas adsorption, Ross determined that the adsorbed gas he was studying formed a two-dimension phase on uniform surfaces, a result at odds with contemporary theory.

In 1948, Ross landed an associate professorship at Rensselaer Polytechnic Institute, becoming a full professor in 1952, an active emeritus in 1980, and a retired emeritus in 1994. During that tenure he wrote 4 books, edited 3 more, published over 150 papers, and mentored more than 30 doctoral students.

During his early education at the High School of Glasgow, Ross developed an enthusiasm for the writings of Victorian sage John Ruskin, an avocation that led over the years to collections of many rare books, literary and scientific. In 1981, he donated his Ruskin letters collection to the Rush Rhees Library of the University of Rochester, and in 2001, he published The Catalogue of the Herschel Library, a listing of the books owned by astronomers William and John Herschel, the bulk of which he had purchased at auction. In 1977, Ross founded and endowed the James Clerk Maxwell Foundation to promote education in the physical sciences and to honor famed Edinburgh native James Clerk Maxwell. In 1993, with Ross’s encouragement, the Foundation made a major financial commitment to purchase and occupy Maxwell’s birthplace in Edinburgh’s New Town. With considerable national support, the institution is now flourishing.

Sydney Ross was predeceased by his mother, father, and sister Elizabeth. He never married and leaves no descendants, but he will be sorely missed by his former students, faculty, and friends. He participated in the Anatomical Gift Program of The Albany Medical College, so there will be no funeral. A memorial service is anticipated at a later date. In lieu of flowers, those wishing to honor his life are encouraged to contribute to The James Clerk Maxwell Foundation, 14 India Street, Edinburgh EH3 6EZ, Scotland, or to the Sydney Ross Lecture Series, Department of Chemistry & Chemical Biology, 120 Cogswell, Rensselaer Polytechnic Institute, 110 8th Street, Troy, NY 12180, or to the charity of one’s choice.  To leave a message of condolence for the family, please visit www.HansFuneralHome.com.

Offer Condolence for the family of Sydney Ross

A Certified Celebrant is a person who is trained and certified to meet the needs of families during their time of loss.  A Celebrant serves by providing a funeral service that is ...  END_OF_DOCUMENT_TOKEN_TO_BE_REPLACED