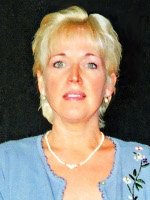 NISKAYUNA – Susan L. Forman, 47, died on Saturday, September 11, 2010 at St. Peter’s Hospital with her loving family at her side, following a brief illness.  She had recently succeeded in recovering from breast cancer.

Born in Pittsfield, MA, she was the daughter of the late Ray and Norma Luscier of Cheshire, MA, and lived in Niskayuna since 1986.  She was a graduate of the Massachusetts College of Liberal Arts and was employed as an administrative assistant in the New York State Capitol’s Executive Chamber, until leaving to concentrate on raising a family and supporting the community. She was a member of the Niskayuna Schools PTO, the Niskayuna Moms’ Group, and promoted reading for children.  She supported various charitable organizations including Community Hospice of Schenectady, Ellis/Bellevue Mobile Mammography Van, and the Animal Protective Foundation (APF) in Scotia.  As a breast cancer survivor she campaigned for greater awareness.

Sue is survived by her husband, Glenn, her son, Christopher, and daughter, Chelsea, and also her sisters Lori (Kevin) Diggs of East Greenbush, and Linda Savary and Kathy Luscier of Cheshire, MA, and her nieces Carrie, Kaylie, and Hannah Diggs and Becky Savary and nephews Michael, Daniel, and Jeffrey Savary and many great nieces and great nephews.

Relatives and friends are invited to attend her memorial service on Saturday, September  18 at the Niskayuna Reformed Church, 3041 Troy-Schenectady Road,
Niskayuna, NY 12309 with calling from 10AM, followed by an 11AM service and reception.

Sue’s family would like to extend a special thank you to St. Peter’s Hospital and to all involved who provided care to our wife and mother.

Those wishing to remember Sue in a special way may send a contribution to one of the charities to which she supported listed above.

Those wishing to leave the family a special message or obtain a prayer card may do so on their guest book at www.HansFuneralHome.com .

Offer Condolence for the family of Susan L. Forman

A Certified Celebrant is a person who is trained and certified to meet the needs of families during their time of loss.  A Celebrant serves by providing a funeral service that is ...  END_OF_DOCUMENT_TOKEN_TO_BE_REPLACED