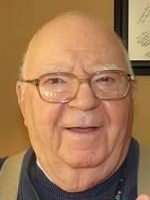 ALBANY – Stanley F. Gecewicz, 88, of McKownville, died Monday, September 3, 2012 at the Albany Stratton VA Medical Center.  Mr. Gecewicz was born and raised in Albany, the son of the late John and Mary Janczys Gecewicz.  He lived in McKownville for many years.  He served in the U.S. Army during World War II, and later was employed by the D&H Railroad for many years until his retirement.  He was a life member of the McKownville Fire Dept., and served as Fire Commissioner.  He also was a communicant of Christ the King Church in Guilderland, and a member of the Guilderland Elks #2480.

Mr. Gecewicz was predeceased by his wife Rita in 2010.  He is survived by his daughter Rosemary Frazier of Delmar; his son Michael Gecewicz (Barbara Frankel) of Albany; his brother Francis “Jim” Gecewicz of Castleton; his grandchildren Thomas Frazier, Jr. (Jill), James Frazier (Kim), Marie Spain (Robert), Lori Haertel (Mike), Kerry Baggott (Scott), and Justin Gecewicz (Natalie); and by twelve great grandchildren, with a new great grandchild expected in a few days.  He was predeceased by three brothers and one sister.

The Gecewicz family would like to extend their heartfelt appreciation to the Carmelite Sisters and staff of the Teresian House, especially on 3A; the members of the McKownville Fire Dept. and Ladies Auxiliary; David and Maura Clancy, Pastor Mark Mueller:  Doctors David, Hsu, Powell, Phelps, and Talati; and, the nursing staff from 8B at the Stratton VA, for the wonderful care they provided to their father.

A Mass of Christian Burial will be celebrated in the Infant of Prague Chapel of the Teresian House, 200 Washington Ave. Ext., Albany, Saturday morning at 11:00.  Relatives and friends are invited, and may call at the Hans Funeral Home, 1088 Western Ave., Albany on Thursday from 4-7 p.m.  Interment will be in St. Agnes Cemetery, Menands.  In lieu of flowers, memorial contributions may be made to the Teresian House Memorial Fund, 200 Washington Ave. Ext., Albany, NY 12203.  To leave a message of condolence for the family, send a sympathy card, or obtain directions to the funeral home, please visit www.HansFuneralHome.com.

Offer Condolence for the family of Stanley F. Gecewicz

A Certified Celebrant is a person who is trained and certified to meet the needs of families during their time of loss.  A Celebrant serves by providing a funeral service that is ...  END_OF_DOCUMENT_TOKEN_TO_BE_REPLACED