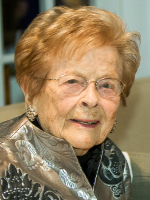 MENANDS – Shirley Jean Herdman Gillett Curtis passed away at her home in Menands, New York on December 24, 2017 at the age of 101.  Born in Montreal, Quebec, Canada, on February 8, 1916, she was the daughter of the late Lorne Herdman and Stella Lynn. She was pre-deceased by her husbands George Herbert Gillett and Walter Stanley Curtis and by her sisters Lorna Willis and Paula Bremner.

Educated at St. Helen’s Anglican Girls School, in Dunham, Quebec (1933) and Miss Graham’s Business College in Montreal (1934 with honours), she worked for the Canadian General Electric Company until her marriage in 1936. She was the recipient of piano training from an early age, and, throughout her life, continued her studies, taught children and adults and held recitals. Appreciation of music was a major legacy to her family and friends.

In 2001, at the age of 85, she published her memoirs entitled “Recollections”. She also recorded 3 albums of her piano music. Her contributions to the cultural life of Albany were acknowledged by the Capital District Senior Issues Forum when they awarded her a Senior Lifetime Achievement Award in 2002.

Always stylish, she enjoyed gardening and entertaining. She was a devoted matriarch who inspired and mentored her family. To her friends she was concerned, loyal and compassionate. She will be remembered with a great deal of love and affection by all who knew her.

The family would like to thank the many friends and caregivers who made her last years comfortable. Those who wish may consider a donation to the Northeastern Association for the Blind at Albany which was particularly helpful to her.

A celebration of her life is scheduled for February 3, 2018 at 10:30am at the Cathedral of All Saints at 62 South Swan Street, Albany, New York. A reception for family and friends will be held at the Fort Orange Club immediately following.

Should you wish to remember her, take a few minutes to listen to Op. 90/4, her favorite of Schubert’s Impromptus.

To leave a message of condolence for the family, please visit www.HansFuneralHome.com.

A Certified Celebrant is a person who is trained and certified to meet the needs of families during their time of loss.  A Celebrant serves by providing a funeral service that is ...  END_OF_DOCUMENT_TOKEN_TO_BE_REPLACED