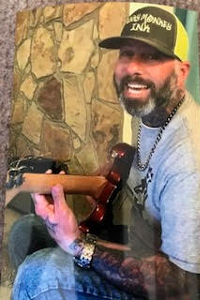 COLONIE – Shawn Patrick McClune, 42 (aka Shawny-Mac or Mac) passed away peacefully on Friday June 5th, 2020 at St. Peter’s hospital with his mother and father by his side and about 100 of his friends and family gathered outside the window of his room for his final farewell. When Shawn passed at 11:43 that morning a group of his motorcycle friends roarded their engines and gave a final ride past the hospital honoring their brother. Thank you to all for that, especially Chris Fonda.

Born in Albany, NY he attended Columbia High School and Colonie Central High School, he was the son of Nancy Capizzo of Clifton Park and Marty McClune of Menands. At the time of his death he was a self employed contractor and had worked in the auto sales for many years.

He was the loving father to Brandon Chandler (mother Dawn) and Grayson McClune (mother Kari), brother of Stephanie McClune and Katie Reilly (Tim), uncle to Kollin Reilly and London Reilly and Liliana Futia. Shawn’s life long friends were called the Goon Squad which include Gene Gardy (Holly & Gianna), Mike Curry and Andy Weis. Goonie’s Never Die is what they always said. Special mention to Eric King who was as close to Shawn as anyone for the past 10 years. Shawn was also survived by his girlfriend Keri Gionet and her daughter Maddie.

Shawn had so many friends that extended from coast to coast, especially Atlanta, GA, so it is impossible to list them all. He was fiercely loyal and protective of his family and friends and his friends were his family and family went deeper to him than blood and DNA. He had a way to draw people in and so many people told us that he was their best friend and he impacted their lives in a positive way.

Our family would like to thank the ICU staff at St. Peter’s hospital for the special care they gave to Shawn and a special thank you to Dr. Polomsky who operated on Shawn for 16 hours and tried hard to save his life and showed a great amount of compassion.

Because of Covid 19 there will be no services. However our family is going to throw a get together at his sister Katie’s house on Saturday June 27th starting at 1 pm and invite all to stop by 12 Nelson Ave, Latham NY to honor him. Arrangements have been entrusted to the Hans Funeral Home, Albany. To leave a message of condolence for the family, please visit  HansFuneralHome.com .

Offer Condolence for the family of Shawn P. McClune

A Certified Celebrant is a person who is trained and certified to meet the needs of families during their time of loss.  A Celebrant serves by providing a funeral service that is ...  END_OF_DOCUMENT_TOKEN_TO_BE_REPLACED