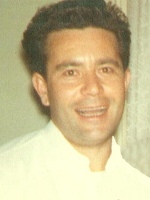 ALBANY – Salvatore L. Raso, 82, of Albany, died Saturday, November 29, 2014 at St. Peter’s Hospital, surrounded by his loving family after a long illness.  Salvatore was born and raised in Cinquefronde, Reggio Calabria, Italy to the late Francesco and Teresa Ascone Raso.  He served in the Italian Army for a time.  After emigrating to the U.S., he was employed by M&C Colatosti Construction for 32 years, and was also employed by the New York State Office of General Services for 17 years.  He loved fishing, swimming, gardening and making wine.  He also enjoyed watching Dallas cowboys football, soccer and playing Italian cards.

Salvatore is survived by his beloved wife of 49 years, Angelina Giuliano Raso; his son Frank Raso (Courtney), and his daughter Teresa Raso; his grandchildren Francesco and Salvatore Raso; his brothers Franco Raso (Lena), and Angelo Raso and family; his sisters in Italy Caterina Federico (Giovanni), Elena Bisognano (Nino), and Rosa Vallone (Carmelo); his mother in law Josephine Giuliano; his sister in law Rose Giuliano; his brothers in law Dr. Carmen Giuliano and Paul Giuliano (Louise); in this country by his nephews Alfie Giuliano (Eleanor) and Mark Giuliano (Kelly); in Canada by his nephews Enzo, Frank and Sam Raso, and nieces Teresa Raso Boudreau (Neal), Mela and Angela Raso; and his nephews Franco Raso (Antonella), Tony Raso (Sandra) and Pasquale Raso (Claudia); and by many other nieces and nephews in Italy.  He was predeceased by his brother and his brother’s wife Giuseppe and Enza Raso.

The family would like to thank Salvatore’s brother in law Dr. Carmen Giuliano for the kind assistance and care he provided during Salvatore’s illness.

Offer Condolence for the family of Salvatore L. Raso

A Certified Celebrant is a person who is trained and certified to meet the needs of families during their time of loss.  A Celebrant serves by providing a funeral service that is ...  END_OF_DOCUMENT_TOKEN_TO_BE_REPLACED