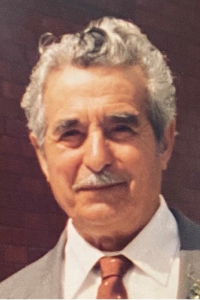 ALBANY – Salvatore Ilardo, 97, of Albany, passed away peacefully on Thursday, April 2, 2020, with his children by his side. Salvatore was born in Lascari, Palermo, Sicily and was an Armed Forces of Italy WWII Veteran. He emigrated to the US with his family in 1966. He was employed as a Laborer for Laborers Local 190. Salvatore loved to garden and tend to his land in Albany and in Sicily during his annual trips with his wife to Italy. Salvatore will be remembered for his love of his fig and lemon trees, that he would nurture and prune every year, the smell of his freshly baked bread, his cellar filled with homemade cured meats, olives, cheeses and wine, that he would bring to every family gathering and most of all, for his love and dedication to his family and friends.

A funeral mass was not held last year due to the health concerns at the time.  A funeral mass will be celebrated at 9:00 a.m. on Saturday, June 19, 2021 in All Saints Catholic Church, 16 Homestead St. (behind CVS), Albany.  Registration for the mass is not required.  The mass can also be viewed via live-streaming at: https://www.youtube.com/watch?v=E5xiadY_mls  Arrangements have been entrusted to the Hans Funeral Home, Albany.  To leave a message of condolence for the family, please visit www.HansFuneralHome.com.

Offer Condolence for the family of Salvatore Ilardo

A Certified Celebrant is a person who is trained and certified to meet the needs of families during their time of loss.  A Celebrant serves by providing a funeral service that is ...  END_OF_DOCUMENT_TOKEN_TO_BE_REPLACED