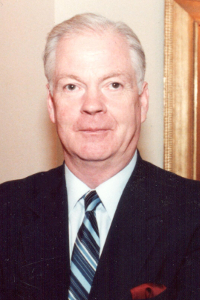 ALBANY – S. Robert Bennett, 89, of Albany, passed away peacefully on Thursday, September 12, 2019 in the Hospice Inn at St. Peter’s Hospital with his loving wife, Noreen Quinn Bennett, at his side.  Bob was born in Newtownforbes, County Longford, Ireland on June 20, 1930.  He was the son of the late Robert Bennett and Ellen Abbot Bennett.  Bob’s mother died when he was six and his father when he was nine.  As a young man, he went to England to seek employment.  He was hired by the Duchess of Portland at Welbeck Abbey.  However, his goal was to get to America so he next accepted a position at Government House in Bermuda since it was closer to the United States.  Later he applied for a visa to go to the United States, but the Governor, who was his boss, refused to grant him one.  So Bob returned to England and went to work at the Belgian Embassy.  He had turned down a job with Lord Mountbatten because at the Belgian Embassy he would not have to pay England’s high taxes.

In 1952, Bob emigrated to the United States.  He arrived on Tuesday and went to work for the New York Telephone Company on Friday.  Bob’s longest employment of 37 years was at the New York State Executive Mansion.  He lived in the mansion for twenty years – “longer than any Governor” – he used to say.  He moved out of the mansion in 1974 when he married Noreen Quinn in a ceremony at the Mansion.  Bob served under six Governors: Dewey, Harriman, Rockefeller, Wilson, Carey and Mario Cuomo, most of that time as the manager of the Executive Mansion.  When asked who was his favorite Governor, he would always say that they all were fine people elected by the good people of New York State.

Outside of his employment, Bob loved being with family, traveling in the United States and Europe and especially his many trips to Ireland, England, Scotland and Wales to visit his sisters and their families.

Governor Mario Cuomo wrote a note to Bob on the occasion of Bob’s retirement which expresses the thoughts and feelings of Bob’s family and friends at this time.  He wrote “Time will pass but we won’t forget… your excellence, your kindness, your dignity and your charm.”  We also will not forget Bob’s steadfastness and soft brogue.  We are all grateful for the compassionate care Bob received at the Hospice Inn and the many kindnesses and exceptional support from our dearest friends and neighbors.

In addition to his beloved wife, Bob is survived by his sisters, Muriel Jones of Ireland and Ruth Stanford (Peter) of England; his sister-in-law Mary Ellen Sartoris (Paul) of Niskayuna; his nieces and nephews: Virginia Madoc of Wales, Iain McDonald (Joan) of Wales, Gwenda Rainford (Paul), Richard Stanford, Pauline Conway (Steve), Pamela Allan (David) and Robert Orzel (Denise) all of England, Alexander Jones and David Jones of Ireland, Kevin Sartoris of Peterborough, NH, Karen Bonk (Edward) of Ballston Lake, and Janet Wheeler (Gregory) of Clifton Park.  He is also survived by many great nieces and nephews.  He was predeceased by his parents and his siblings: Thomas Bennett, Elizabeth McDonald, Frances Draper, and Rachel Orzel, and his nephew, Brian Orzel.

Funeral services will be held in the Hans Funeral Home, 1088 Western Ave., Albany, Saturday at 12:00 noon, and from there to Westminster Presbyterian Church, 262 State St, Albany, at 1:00 p.m.  Relatives and friends are invited, and may call at the funeral home Friday from 4-7 p.m.  Interment will be in Most Holy Redeemer Cemetery, Niskayuna.  The family suggests memorial contributions to Community Hospice, or to a charity of one’s choice.  To leave a message of condolence for the family or obtain directions to the funeral home, please visit www.HansFuneralHome.com.

Offer Condolence for the family of S. Robert Bennett

A Certified Celebrant is a person who is trained and certified to meet the needs of families during their time of loss.  A Celebrant serves by providing a funeral service that is ...  END_OF_DOCUMENT_TOKEN_TO_BE_REPLACED