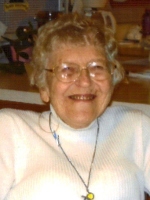 ALBANY – Ruth Mesick, 97, of Voorheesville died peacefully on September 20, 2013.  Ruth was born December 9, 1915 in Milwaukee Wisconsin. She traveled here to New York after graduating from high school. She had been residing at the Teresian House in Albany.  Ruth and her husband William Mesick moved to Brooklyn while her husband was on active duty during WW II. Then moved to Albany, the village of Voorheesville became their permanent home. While in living in Voorheesville, she and her family ran a small department and liquor store in both villages of Voorheesville and Altamont for many years.

Ruth was an active member of the First United Methodist Church of Voorheesville, The ADK,  American Legion, New Scotland Senior Group and The Historical Society.  She enjoyed traveling, hiking, camping, gardening, miniatures and painting.  She began painting when she was young, and never stopped.

Ruth is survived by her four children Pamela Longway, William, David and Richard Mesick; her grandchildren, Jackie and Sandy Smith (Eric), Scott and Chad Longway (Maureen) and Josh and Rachel Taylor; her great grandchildren Jimmy and Travis Stealey, Kevin I. Smith, Jennifer and Leila Smith. Riley and Nathan Longway. Ruth was a dear friend, and loved by so many and she will be truly missed.

A memorial service will be held to remember Ruth on October 19th at 11:00am at the Voorheesville First United Methodist Church.  The family asks that any memorial contributions be sent to the American Cancer Society.  To leave a message of condolence for the family or send a sympathy card, please visit www.HansFuneralHome.com.

Offer Condolence for the family of Ruth Mesick

A Certified Celebrant is a person who is trained and certified to meet the needs of families during their time of loss.  A Celebrant serves by providing a funeral service that is ...  END_OF_DOCUMENT_TOKEN_TO_BE_REPLACED