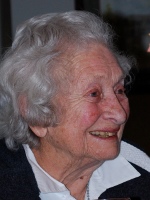 SLINGERLANDS – Ruth E. Logan, most recently residing in the Beverwyck and Terrace retirement homes in Slingerlands, a lifelong resident of Albany, died Friday, August 20, 2010.  She was 95 years old.  Born in Albany on March 24, 1915, she was the first of two daughters born to John Joseph Duffy and Elizabeth Wicks Duffy.  Growing up in Albany, Ruth was a standout in school sports including soccer and field hockey and was a top student.  She attended the State University College at Albany and graduated in 1936.  After college, Ruth began working for the State of New York.  She served in the United States Marines as a meteorologist, training at Quantico, Virginia and serving in Oklahoma, during World War II.  After the war, Ruth earned a Masters of Arts in Political Science from Columbia University in 1947.  She then returned to her pre-war job, eventually rising to a top administrative position in the Office of the New York State Comptroller in the Alfred E. Smith Building in Albany, where her nieces proudly visited her while taking school field trips to the city.  She was married to John Logan in 1955, remaining wedded until his death in 1982.  The two enjoyed a happy marriage filled with travel, golf, bridge and bowling with friends, and relaxation at their summer camp at Spring Lake, New York.  After John’s death, Ruth continued to spend her summers at Spring Lake for more than 30 years, enjoying morning coffee on the deck, canoeing, and bridge.

One of Ruth’s lifelong joys was travel.  Beginning with her experiences in the Marines and a cross country trip with close friends, Ruth’s travels extended all over the continental United States, Alaska, Europe, Asia, Africa, and, most recently, to the Galapagos Islands at age 86. She traveled with her husband John during their marriage and also with her lifelong friends Margie Carey and Connie Parkinson.  Ruth was an avid golfer into her nineties, winning a Beverwyck putting contest at the age of 91.  She was also an opera enthusiast, a lover of art and art museums, and an eager learner, taking classes into her eighties. And Ruth was a generous supporter of numerous and varied charitable organizations.

In her last decade, she continued to walk two miles every day, read the newspapers in the morning, and visit with her friends Ann, Mary, and Marilyn on a regular basis.

Though Ruth had no children, she had very warm relationships with her three nieces and her younger sister, all of whom stayed involved with her throughout her life.

Ruth will be remembered as an adventurous woman, always upbeat, and never a complainer.  She will also be remembered for her competitive nature, her independence and “can do” personality, and her quick wit, as she was always ready with a one-liner.  She was charming and lovable, beloved by all who knew her well.

A memorial service will be held at the Hans Funeral Home in Albany at a later date.   To leave a message of condolence for the family or obtain directions to the funeral home, please visit www.HansFuneralHome.com .

Offer Condolence for the family of Ruth E. Logan

A Certified Celebrant is a person who is trained and certified to meet the needs of families during their time of loss.  A Celebrant serves by providing a funeral service that is ...  END_OF_DOCUMENT_TOKEN_TO_BE_REPLACED