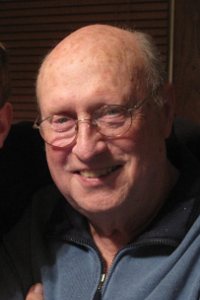 ALBANY – Robert P. Saunders, 85, of Albany, a longtime resident of Middletown, passed away peacefully on Thursday, May 20, 2021. Robert was born in Glen Cove, the son of the late Arthur and Anna Zimmerman Saunders. He and his wife Ruth met at Cortland State Teachers College and moved to Middletown in 1958 to start their teaching careers. In more than three decades with Middletown City Schools, Robert taught science, served as junior high principal for many years and retired as interim superintendent. He was a longtime member and president of the local Rotary International chapter, leader of the Orange-Rockland Travel Club, longtime member of the Elks and the Masonic Lodge, and member of the Wanaksink Lake Club. He enjoyed bowling, golfing and fishing at his lake home and in Albany was a communicant of All Saints Catholic Church and the former Holy Cross Church. In 2001, Robert and his wife moved to Albany to be closer to their daughters and grandchildren. Nothing was more important to them than spending time with their family and watching their grandchildren grow up.

Robert was predeceased by his beloved wife of 46 years, Ruth Ann Griffin Saunders, in 2004. He is survived by his daughters Sylvia O’Brien and husband Tim, and Renee Golderman and husband Phil of Albany; and by five grandchildren: Sean, Eric, Maggie, Rebecca and Jamie. He was also predeceased by his sister Ruth Adamo and her husband John.

Funeral services will be held in the Hans Funeral Home, 1088 Western Ave., Albany, Sunday afternoon at 5:00 p.m. Relatives and friends are invited, and may call at the funeral home on Sunday prior to the service from 3-5 p.m. Interment will be in Our Lady of Angels Cemetery, Colonie, on Monday. The family suggests memorial contributions to the American Diabetes Association or the American Heart Association. To leave a message of condolence for the family or obtain directions to the funeral home, please visit www.HansFuneralHome.com .

This is Robert’s video tribute:

Offer Condolence for the family of Robert P. Saunders

A Certified Celebrant is a person who is trained and certified to meet the needs of families during their time of loss.  A Celebrant serves by providing a funeral service that is ...  END_OF_DOCUMENT_TOKEN_TO_BE_REPLACED