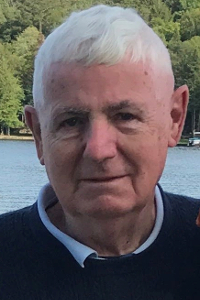 ALBANY – It is with great sadness that the Powers family announces the passing of our husband, father, grandfather, brother, and uncle, Robert Powers, on Thursday, May 12, 2022.

Robert Patrick Powers was born in Utica, NY on October 14, 1934. He was the sixth of seven children born to Florence “Mam” Edgar and Thomas A. Powers.

Bob grew up in Utica, NY and attended area schools. After graduating from Utica Free Academy in 1953, he began a career in sales and started working for the AC Delco division of General Motors. Over a career lasting 40 years, Bob made many friends and logged countless miles driving across New York state for his job duties.

Following his retirement in 2000, Bob continued to enjoy life with his family, attending various ball games and taking his daily walks. During the week, he could often be found at his favorite coffee shop and bakery, the Bella Napoli, holding court with his many friends.

Bob enjoyed most his role as father and grandfather, helping in a variety of roles like coaching and encouraging all of his children and grandchildren’s endeavors. He was not only a great father to his own kids but a beloved parental figure to others in the community. Bob could often be found with a full car filled with children tagging along on road trips to games, concerts and other events.

Possessed with tremendous energy and endless enthusiasm for life, Bob was blessed with many friends and was known for bringing people together. He had a reputation for having the “Gift of Gab” as well as for his kindness and generosity. For many years, Bob was the central male figure of the extended Powers clan and was looked up to by all.

Bob’s biggest passion was sports, especially high school and college basketball. Friends often marveled at his stamina in seeing up to three games in the same day. He enjoyed watching games at Schuyler High School and was a regular presence at Siena College and Christian Brothers Academy games for many decades, long after his own kids had finished school there.  Bob was also a member of the Knights of Columbus for over 70 years, and was a long time communicant of the former Holy Cross Church and Blessed Sacrament Church.

Bob greatly enjoyed traveling yearly each summer to see family and friends in Cooperstown and Old Forge, NY, as well as to New York City. A voracious reader, he also enjoyed reading many newspapers and books nightly and learning more about his Irish heritage, history, and area politics.

In 2014, Bob suffered a severe stroke with many lingering effects, though he continued to be a loving presence for his family and attended numerous social engagements until he entered St. Peter’s rehabilitation in late 2021.

Bob leaves behind to cherish his memory his beloved wife of 62 years, Mary Ellen; his four sons, Thomas, Robert II(Michelle), Christopher, and Stephen (Cini); his five grandchildren, Maximus, Sadie,  and Rory Powers, and Anissa and Tessa Powers; one sister, Rosemary Davies (Dorance); one sister-in-law Gretchen Haight; two brothers-in-law, Harry Goodson and John Banks; and many nieces and nephews along with their children and grandchildren.

A Mass of Christian Burial will be celebrated at 9:00 a.m. Friday morning in Blessed Sacrament Church, 607 Central Avenue, Albany, NY 12206.  Relatives and friends are invited and may call at the Hans Funeral Home, 1088 Western Ave., Albany on Thursday from 4-7 p.m.  Interment will be held at a later date in St Joseph’s cemetery near Utica, NY.  Those who wish may make a memorial contribution to Christian Brothers Academy, 12 Airline Dr, Albany, NY 12205.  To leave a message of condolence for the family or to obtain directions to the funeral home, please visit www.HansFuneralHome.com

Offer Condolence for the family of Robert P. “Bob” Powers

A Certified Celebrant is a person who is trained and certified to meet the needs of families during their time of loss.  A Celebrant serves by providing a funeral service that is ...  END_OF_DOCUMENT_TOKEN_TO_BE_REPLACED