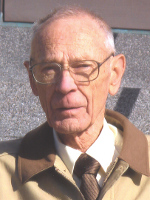 GUILDERLAND – Robert Lockwood Perry, 82, of Guilderland, passed away on Tuesday, November 9, 2010 at St. Peter’s Hospice Inn.  Born on September 16, 1928, the son of James and Mabel Perry, Robert graduated from Milne High School and earned a BS degree in Chemistry at Union College.  He served in the U.S.  Army during the Korean War and was stationed at the Army/Navy Hospital in Hot Springs, Arkansas, where he met the love of his life, Peggy June Wiegand.  He returned to Union College to earn his MS in Chemistry, and worked at Sterling Winthrop Research Institute in Rensselaer for nearly 40 years, retiring as Administrator for Safety and Security.  He was a volunteer member of the Hudson Valley Girl Scouts for over forty years, and enjoyed camping at the former Camp Little Notch in Fort Ann, NY.  He lived in McKownville all his life, and was a member of the McKownville Fire Dept. for 60 years, serving as Chief for 21 of those years.

Robert was predeceased by his wife Peggy in January 2001.  He is survived by his children Robert and Deborah Perry; his daughter in law Kathy Perry; his grandchildren Katy, Tom, Richie, and Ian; his sisters in law Patricia Foster, Katy Emmert, Edna Fuller, Eloise Wiegand, and Susie DeClercq; and his nieces Kimberly Tucci, Susan Ludwig, and Karen Santamaria.  He was predeceased by his brother James Perry, who died in 1966.

Funeral services will be held in the Hans Funeral Home, 1088 Western Ave., Albany, Friday morning at 10:00.  Relatives and friends are invited, and may call at the funeral home Thursday from 4-8 p.m.  Interment will be in Albany Rural Cemetery, Menands.  In lieu of flowers, those who wish, may make memorial contributions to St. Peter’s Hospice Inn, 315 So. Manning Blvd., Albany, NY 12208; or to the American Lung Association, 155 Washington Avenue # 201, Albany, NY 12210.  To leave a message of condolence for the family or obtain directions to the funeral home please visit www.HansFuneralHome.com.

Offer Condolence for the family of Robert Lockwood Perry

A Certified Celebrant is a person who is trained and certified to meet the needs of families during their time of loss.  A Celebrant serves by providing a funeral service that is ...  END_OF_DOCUMENT_TOKEN_TO_BE_REPLACED