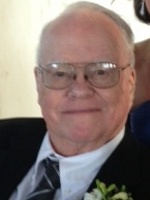 DELMAR – Robert L. Youngs, 91, of Delmar, passed away peacefully on Friday, June 26, 2015.  Bob was born on November 18, 1923 in Newark, NJ, the son of the late Granville and Eugenie Youngs.  He was a proud marine, having served in the U.S. Marine Corps in World War II, including in the first wave of Iwo Jima and the Battles of Saipan and Tinian.  He was awarded several purple hearts for his bravery – Semper Fi.  Bob was a designer for Bell Laboratories for 40 years in New Jersey and Pennsylvania.  He obtained several patents for his work involved with the Telstar satellites.

A memorial service will be held in Bally, PA, at a later date.  Those who wish may make a memorial contribution to Patriot Flight, Inc., PO Box 190, Delmar, NY 12054.  Arrangements have been entrusted to the Hans Funeral Home, Albany.  To leave a message of condolence for the family, please visit www.HansFuneralHome.com .

Offer Condolence for the family of Robert L. Youngs

A Certified Celebrant is a person who is trained and certified to meet the needs of families during their time of loss.  A Celebrant serves by providing a funeral service that is ...  END_OF_DOCUMENT_TOKEN_TO_BE_REPLACED