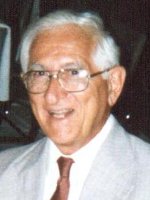 ALBANY – A gentleman and a scholar, Robert J. (Bob) Suozzo, husband of Dolores and dedicated father of nine children and many grandchildren, passed away peacefully at 1:50 pm on Thursday, October 6, 2011. In his final days, Robert was surrounded by his loving family and friends.  Born in New York on August 5, 1923 of Italian immigrant parents, Saverio and Maria (Tolve) Suozzo, Robert grew up in Astoria, NY.  He graduated from Columbia College in New York in 1943 and received his medical degree from New York Medical College in 1948. After serving as a physician and captain in the US armed forces in post-war Japan, Robert completed his general and thoracic surgery residencies at the Veterans’ Administration Hospital. He was a Fellow of the American College of Surgeons.

Robert practiced locally as a surgeon at Albany Memorial and St. Peter’s Hospitals. During his 30-plus years in private practice, he also served as Chief of Surgery and Chairman of Staff at Albany Memorial Hospital. He retired from medicine in 1990. Robert’s career as a surgeon was marked by his dedication to the advancement of his profession, his compassion for his patients, and his kindness toward hospital staff.

Once retired, family time and his many interests filled his life. He enjoyed presiding over large family dinners filled with good food and robust conversation. Robert was cherished by his children and grandchildren for his integrity, intellect, huge heart, and dry wit.

He was a lifelong learner with many interests, ranging from the cerebral: bridge, chess, crosswords and cello (which he picked up in his 50s); to the adventurous: waterskiing, snowskiing and traveling. He was an avid tennis player well into his 80s. His most recent avocation was pool, which merged his love of mathematics and economy of motion. His days were sure to include a crossword puzzle and perusal of the latest medical and scientific research.

The family wishes to express their appreciation for the kindness of the staff of St. Peter’s Hospital where he spent his final days.

Funeral services will be held in the Hans Funeral Home, 1088 Western Ave., Albany, Monday at 10am, after which a Mass celebrating Robert’s life will be held at 11am in St. Vincent De Paul Church. Relatives and friends are invited, and may call at the funeral home Sunday from 3-6pm. To leave a message of condolence for the family or obtain directions, please visit www.HansFuneralHome.com .

Offer Condolence for the family of Robert J. Suozzo

A Certified Celebrant is a person who is trained and certified to meet the needs of families during their time of loss.  A Celebrant serves by providing a funeral service that is ...  END_OF_DOCUMENT_TOKEN_TO_BE_REPLACED