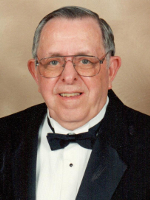 ALBANY – Robert A. Blendell, 86, of Albany, passed away Monday, May 1, 2017 in the Hospice Inn at St. Peter’s Hospital.  Bob was the first in his family to earn a diploma, graduating from Albany High School in 1950.  He served as a private first class and tanker in the command headquarters of the 1st Armored Division of the US Army at Fort Hood from 1951-53 during the Korean War.  After an honorable discharge, he briefly studied at Siena College and was employed as a computer operator during the early era of mainframe computing. He ultimately worked for the NYSDOT as a Senior Supervising Computer Operator for over 30 years.

For many years, Bob coached at National Little League and Albany Central Babe Ruth and was a Scoutmaster for Troop 49, affectionately known as “Sarge” for his gruff demeanor. He was a lifetime member of the Italian American Community Center and enjoyed an active retirement, spending his winters in Florida and traveling across the country and Europe. He had a curious and active mind, maintaining interests in history, nature, and the latest computer technology. Due to a disability, he used a mobility scooter outdoors, taking frequent daily rides throughout the Albany Municipal Golf Course neighborhood and was affectionately known as “the Mayor” and “Scooter.”

Bob is survived by his wife of 63 years, Frances (née Rosetti), his son Karl, and his grandson Brendan, both of Guilderland; and by many nieces and nephews. He was predeceased by his parents John A. and Helen Veronica (née Jones); and his siblings Edward, Margaret, Joseph, Rita, Louis, and Thomas.

Funeral services will be held in the Hans Funeral Home, 1088 Western Ave., Albany, Friday morning at 8:15 a.m., and from there to All Saints Catholic Church, 16 Homestead St., Albany (behind CVS), at 9:00 a.m.  Relatives and friends are invited, and may call at the funeral home Thursday from 4-8 p.m.  Interment will be in Calvary Cemetery, Glenmont.  To leave a message of condolence for the family or obtain directions to the funeral home, please visit www.HansFuneralHome.com.

Offer Condolence for the family of Robert A. Blendell

A Certified Celebrant is a person who is trained and certified to meet the needs of families during their time of loss.  A Celebrant serves by providing a funeral service that is ...  END_OF_DOCUMENT_TOKEN_TO_BE_REPLACED