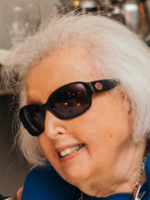 TROY – Rita (Adler) Block, 87, of Troy, NY, died peacefully at home on Sunday, May 7, 2017.  Rita was well-known in the Capital District duplicate bridge world.  She was in love with the game and one of her most exciting events was becoming a Life Master.  Even after Rita lost her eyesight and could no longer play the game, she would attend local games to sit and kibbitz with friends and keep in touch with the bridge world.  According to Bob, she became a far better bridge player after she lost her sight as evidenced by how well she was able to do the Bridge Column in the newspaper.

Rita was a volunteer “social worker” during much of her life.  She learned how to do “patterning” to help a disabled child, worked with families in need to help them improve their circumstances, and for many years taught preschoolers at a local church.

Rita loved to travel!  She achieved her lifetime goal of visiting all 50 of our states as well as numerous trips to Asia, Europe, South America and the Middle East.  Living a year in England and a year in Japan were wonderful experiences for her.

Rita loved water, both fresh and salt. In her youth she did long distant swimming, sometimes with Bob trailing her in a boat.  She always enjoyed the ocean, especially playing in the surf.  And for fishing, she was at home on sea and lake.  Even towards the end when she could no longer see, she went fishing in a boat upon New York lakes and rivers.

Rita is most known for and will be most missed for her generosity and love for her family and friends. Despite suffering, she wanted to see her grandchildren’s major life milestones.  In recent years, Rita was fortunate to be a part of her granddaughters’ weddings, her granddaughter Adena’s ordination as a rabbi, and the birth of her first great grandchild. Her generosity to her family and friends was always clearly apparent in the many dinner parties she hosted, gifts she gave from her heart, and trips she and Bob took their granddaughters on while the girls were growing up.

She is survived by her husband of almost 65 years Robert C. Block; daughter and son-in-law Robin and Christopher Kemper of Lawrenceville, NJ; son and his partner Keith Block and Shigehisa Kasagawa of Tokyo, Japan; granddaughter, grandson-in-law, and great-grandson Adena, Sean, and Jonah Blum of East Windsor, NJ; and granddaughter and grandson-in-law Erica and Jonathan Holland of Washington, DC.

A Celebration of Life will be held at some date in the future.  For those wishing to honor Rita, the family is asking that donations be made in her memory to The Robert C. Block Prize for Graduate Study at RPI, The Community Hospice of Rensselaer County, or a charity of your choice.  To leave a message of condolence for the family, please visit www.HansFuneralHome.com.

Offer Condolence for the family of Rita Block

A Certified Celebrant is a person who is trained and certified to meet the needs of families during their time of loss.  A Celebrant serves by providing a funeral service that is ...  END_OF_DOCUMENT_TOKEN_TO_BE_REPLACED