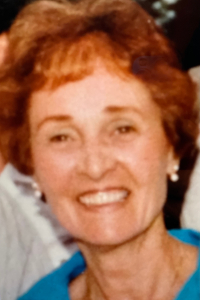 RENSSELAER – Rita A Bremm Dunn, 96, passed away peacefully on Friday December 18, 2020 at the Eddy Village Green in Cohoes NY after a long battle with Alzheimer’s disease. Rita was born in Albany, NY on December 20, 1923 and was the daughter of the late Adam J. and Marie (Hough) Bremm residing at 3 Orford St Albany NY.  Rita graduated from Roessleville high school in 1941. She served in the United States Marine Corp 1943-1946, was Platoon Leader at Camp LeJeune, NC and was later assigned to the Air Station at Quantico VA where she held rank of Corporal.  After her discharge from the Marine Corp, she worked for the Internal Revenue Service in Albany NY.  She married Thomas J Dunn Jr in October 1949and they built a house at 200 Mountainview Avenue in Rensselaer NY where they raised their five sons and daughter. As the children got older, Rita worked nights at Montgomery Wards as a Sr Data Entry Operator; earned an associate degree in Liberal Arts at Hudson Valley Community college in 1973 and worked for the Federal Highway Administration as a Division Administrator Executive Secretary from 1975–1986.  At age 63, Rita volunteered for the Peace Corps and served in Western Samoa (Apia) from 1986-1988.  She taught Typing and Commercial English at the Paul VI Collage (grades 9-12).  She treasured her experiences and special relationships she had living and working with the school’s Sisters, staff and the Samoan people and kept in touch with many of them (especially Sister Nora) years after she returned home.  One of mom’s dreams of traveling the world, was fulfilled during her time and return from Western Samoa.  She traveled to New Zealand, Sydney Australia, Bangkok Thailand, Delhi India, Athens Greece, Rome Italy, and Paris France. Mom was a communicant of St Joseph’s and St John’s Church in Rensselaer NY for many years and loved singing with the choir. In ‘retirement’ Mom volunteered her time to teaching English to people that had immigrated to this country and was always involved in charities helping other people in need.  She was also an avid animal lover always taking care of stray cats along with her favorite cats Taffy, Frannie and Tinker.  She treasured spending time on a beach by the ocean vacationing in Dennisport Cape Cod.  She enjoyed playing the piano, writing poetry, German wine and listening to a wide variety of music (classical to the Bee Gees) but her most favorite artist was Josh Groban, whose music continued to bring great joy and comfort to her right up until the day she died.

Mom was diagnosed with Alzheimer’s in 2002.  She had to be placed in a Memory Care facility after a fall that broke her hip and wrist in 2003. She lived at the Harbor Elder Care in Clifton Park until 2004 and lived at the Eddy Hawthorne Ridge in East Greenbush 2006-2014 and the Eddy Village Green from 2014 to present. The care, compassion, love and support she, as well as the family, received from the management and staff at the Eddy was incredible.  Words cannot express our sincere appreciation and thanks to them for helping to ease mom’s and our struggles faced during those trying times.  A special thank you goes to Elizabeth Boivin, Executive Director/CEO of the Alzheimer’s Association Northeastern NY chapter in Albany NY. Beth assisted the family throughout Mom’s long journey battling Alzheimer’s. Her compassion and support were a godsend that helped us through the many hurdles and struggles we all faced over the past 17 years. Mom would have loved and appreciated Beth’s dedication to helping others and the compassion and assistance she had provided all of us… her actions are how mom lived her life.

Mom was an extraordinary woman.  She taught her sons to dream big and never give up on achieving those dreams, respect others, debate others and revise your beliefs as you go through life, stand tall, pick yourself up from failures, move past obstacles and live life to the fullest.  She instilled her loving and compassionate personality in her sons and brighten the lives of those who met her.

Her spirit has now been freed from her body and she has moved on to the next phase of her life in Heaven. She is back with her Tom, family that has passed and friends she loved dearly (most especially Henrietta Chesley).

In keeping with her compassion and love for others, Rita made a final gift of her body to The Albany Medical College Anatomical Gift Program. A private memorial service and internment of her cremated remains will be held at a later date. Donations in Rita’s memory may be made to the Alzheimer’s Association of Northeastern New York, 4 Pine West Plaza, Suite 405, Albany, NY, 12205 or online at alz.org. To express condolences, please visit https://www.hansfuneralhome.com

Offer Condolence for the family of Rita A. Dunn

A Certified Celebrant is a person who is trained and certified to meet the needs of families during their time of loss.  A Celebrant serves by providing a funeral service that is ...  END_OF_DOCUMENT_TOKEN_TO_BE_REPLACED