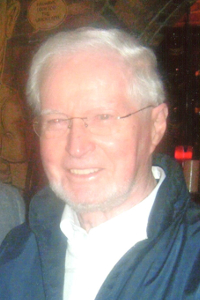 GUILDERLAND – Richard W. Burke, 95, of Guilderland, passed away on Thursday, September 5, 2019, at Albany Medical Center Hospital.  Richard was born and raised in Brooklyn, the son of the late James and Lucy Salmon Burke.  He served in the U.S. Army Air Corps during World War II in the China-Burma-India Theatre.  After the war, he was employed as a horse racing photographer at the various tracks in New York State, then by Grumman Corp. for a time, and then as an automobile mechanic.  He moved to Albany in 1953 and joined Capitol Buick as a salesman.  He later purchased the dealership, and moved the dealership from Albany to Colonie, before his retirement.  Richard took up tennis in his late 40’s and enjoyed the game until age 82.  He also was a member of the local Bonsai Club, and a thirty year member of the Rip Van Winkle Chapter 40 of the National Association of Watch and Clock Collectors.

Richard was predeceased by his wife Elaine N. Murray Burke.  He is survived by his twin sons Robert T. Burke of Clifton Park, and Richard A. Burke of Boynton Beach, FL; his daughter Jeanette A. Burke-Kelly (J. Michael Kelly) of East Greenbush; his grandson Ryan M. Kelly, and his sister Helene Pirozzi (Gary) of Oakdale, Long Island.

Funeral services will be held in the Hans Funeral Home, 1088 Western Ave., Albany, Tuesday morning at 8:15 a.m., and from there to All Saints Catholic Church, 16 Homestead St. (behind CVS), Albany.  Relatives and friends are invited, and may call at the funeral home Monday from 4-7 p.m.  Interment will be in Memory Gardens, Colonie.  The family suggests memorial contributions to Amyloid Research Fund, Amyloidosis Center, 72 East Concord St., K-503, Boston, MA 02118.  To leave a message of condolence for the family or obtain directions to the funeral home, please visit www.HansFuneralHome.com.

Offer Condolence for the family of Richard W. Burke

A Certified Celebrant is a person who is trained and certified to meet the needs of families during their time of loss.  A Celebrant serves by providing a funeral service that is ...  END_OF_DOCUMENT_TOKEN_TO_BE_REPLACED