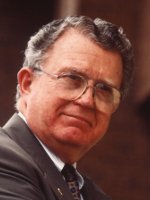 Born September 22, 1932 in Springfield, Massachusetts to the late Estelle (Gagnier) Riendeau and Arthur Riendeau he graduated from Springfield Technical High School in 1950 and received a Bachelors of Science from Springfield College in 1954 and a Masters Degree in Science from the University of Illinois in 1955.  After a brief high school teaching career at Lyndon Institute in Lyndonville, Vermont he served in the United States Army in Denver, Colorado.  While serving in the Army he was involved in research on the physiology of exercise and shared credit for several published studies on the effects of heat, altitude and exercise on the human body.

He joined the faculty of St. Lawrence University in 1958 as an Assistant Professor of Physical Education and coached freshman football, basketball and baseball.  During the summer he managed the Canton Merchants baseball team and later served as the commissioner for the league in which they played.  In 1963 Rensselaer Polytechnic Institute named him an Associate Professor of Physical Education.   He was the head football coach at R.P.I. until 1972 while also coaching freshman basketball, freshman baseball and later supervising the intramural sports program.  During his tenure at R.P.I. he took a football program which had the longest losing streak in college football at the time to several winning seasons.  While at R.P.I. he developed the Football Aptitude Test which measured basic athletic abilities and was the fore runner of testing now widely used in professional sports to evaluate potential prior to draft day.  The system was initially tested outside R.P.I. in the training camps of the Montreal Alouettes and the New York Giants.  He coached the Metro Mallers professional football team in the Seaboard Professional Football League during the 1973 season in which the team continued on to the championship game without ultimate success.  In 1975 he was appointed as an Associate Professor at Oberlin College where he coached the football team, the baseball team and the junior varsity basketball team, which won an Ohio Athletic Conference championship. Sports Illustrated wrote articles about his college football teams in 1965 and again in 1975. In 1979 he left Oberlin and returned to the Capital District to begin a new career in real estate with the Moffit-Holllis company and later was a founding partner in the October Real Estate Group.

Even in death he continues to participate in scientific and medical research.  A memorial service will be held at a later date.

Offer Condolence for the family of Richard P. Riendeau

A Certified Celebrant is a person who is trained and certified to meet the needs of families during their time of loss.  A Celebrant serves by providing a funeral service that is ...  END_OF_DOCUMENT_TOKEN_TO_BE_REPLACED