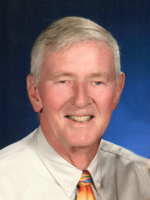 GUILDERLAND – Richard J. “Dick” Dewey, 79, passed away peacefully on Sunday, January 22, 2017, with his loving family by his side.  Dick was born in Albany, the son of the late Ashton F. Dewey and Margaret D. Murray Dewey.  He lived in this area all his life, and attended St. Margaret Mary’s Grade School, Albany High School, and Siena College.  He was employed for a time by the U.S. Post Office, and the NY State Dept. of Motor Vehicles, and then joined the New York State Dept. of Taxation and Finance where he served for 37 years.  He also was a licensed real estate agent, and sold for Dorp Homes, Bob Howard Realty, and Realty USA.  He was a member for many years of the Pine Haven Country Club, a member of the Guilderland Elks #2480 for 43 years, and a member of the Knights of Columbus.  He had a great love for the game of golf, and also enjoyed gardening.

A Mass of Christian Burial will be celebrated in Christ the King Church, 20 Sumpter Ave., Guilderland Saturday morning January 28,2017 at 10:00 a.m.   Relatives and friends are invited, and may call at the church Friday afternoon from 4-7 p.m.  Interment will be in St. Agnes Cemetery, Menands.  The family suggests memorial contributions to the Christ the King Church Building Fund, 20 Sumpter Ave., Albany, NY 12203.  Arrangements have been entrusted to the Hans Funeral Home, Albany.  To leave a message of condolence for the family, please visit www.HansFuneralHome.com .

Offer Condolence for the family of Richard J. “Dick” Dewey

A Certified Celebrant is a person who is trained and certified to meet the needs of families during their time of loss.  A Celebrant serves by providing a funeral service that is ...  END_OF_DOCUMENT_TOKEN_TO_BE_REPLACED