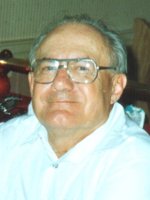 ALBANY – Richard D. Ruprecht, 92, of Albany, passed away on Tuesday, July 8, 2014, in the Hospice Inn at St. Peter’s Hospital.  Richard was born in Albany, the son of the late Berthold and Sophia Moog Ruprecht.  He lived here all his life.  He was a 1940 graduate of Christian Brothers Academy in Albany, and served in the U.S. Army during World War II in the South Pacific.  He was employed by the State of New York and also by the Schaefer Brewery for a time, and then was employed by State Equipment Co., retiring in 1986 after 35 years.  Richard was an avid reader and a Yankees fan, and was a communicant of the former Holy Cross Church, as well as a member of the Holy Cross Men’s Association.

The family would like to thank the staff of the Good Samaritan Nursing Home, and of St. Peter’s Hospice for the wonderful care they provided to Richard.

Funeral services will be held in the Hans Funeral Home, 1088 Western Ave., Albany, Friday morning at 8:15, and from there to All Saints Catholic Church, Homestead St., Albany at 9:00.  Relatives and friends are invited, and may call at the funeral home Thursday from 4- 7 pm.  Interment will be in St. Agnes Cemetery, Menands.  The family suggests memorial contributions to the Mohawk Hudson Humane Society, 3 Oakland Ave., Menands, NY 12204.  To leave a message of condolence for the family, or obtain directions to the funeral home, please visit www.HansFuneralHome.com.

Offer Condolence for the family of Richard D. Ruprecht

A Certified Celebrant is a person who is trained and certified to meet the needs of families during their time of loss.  A Celebrant serves by providing a funeral service that is ...  END_OF_DOCUMENT_TOKEN_TO_BE_REPLACED