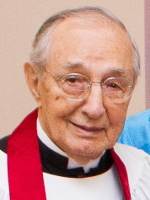 GUILDERLAND, NY – At the age of 99, the Rev. Arthur H. Gerhardt joined his beloved wife, Edith Bender Gerhardt, and passed into eternal glory on November 17, 2016.  Known as the people’s pastor, he was a humble and devoted servant of the Lord, whose ministry spanned over 74 years.

Arthur was a graduate of Concordia College, Bronxville, NY and Concordia Seminary, St. Louis, Mo.  His first parish was in Fullerton, Nebraska before coming to Albany in 1944, where he ministered to both Christ Lutheran Church and Faith Lutheran Church.  Eventually, he devoted his full energies to Christ Lutheran, where in 1957 he oversaw the construction of a new church on Western Ave in McKownville.  After 36 years with Christ Lutheran, he retired, but continued to serve the Lord as an interim pastor to area churches for an additional 20 years.

Rev. Gerhardt also served the church at large in various capacities.  He was the founder of Son Rise Camp in Pottersville, NY and the Good Samaritan Nursing Home in Delmar.  Arthur was a member of the Lutheran Atlantic District Board of Directors, a chaplain for the McKownville Fire Department, the first secretary for the Western Turnpike Kiwanis Club, president of the Guilderland AARP, chaplain of the Albany Civil Air Patrol and chaplain of the 1980 Winter Olympics in Lake Placid.  He also co-chaired the annual Concordia Open Golf Tournament, which was a fundraiser for Concordia’s scholarships.  Concordia College recognized Arthur with the Service of Christ and the Volunteer Service awards.

One of Arthur’s greatest joys was spending time with his family, especially vacationing with his grandchildren on Block Island & Martha’s Vineyard.  He had numerous hobbies that included woodworking, golfing (hole-in-one at the age of 84), stamp and coin collecting, Olympic pin collecting and ice skating.  Most notable were his annual Christmas tree ornaments with a Christ-centered theme.  Arthur and Edith were avid world travelers, exploring destinations as far away as China.

In lieu of flowers, donations may be made to Concordia College NY.  The mailing address is: Concordia College, Att: Heather McGinness, 171 White Plains Rd, Bronxville, NY 10708.  Checks should be made out to “Concordia College NY” with “The Arthur & Edith Gerhardt Scholarship Fund” written in the memo section.  To leave a message of condolence for the family or to obtain directions to the funeral home, please visit www.hansfuneralhome.com.

Offer Condolence for the family of Rev. Arthur H. Gerhardt

A Certified Celebrant is a person who is trained and certified to meet the needs of families during their time of loss.  A Celebrant serves by providing a funeral service that is ...  END_OF_DOCUMENT_TOKEN_TO_BE_REPLACED