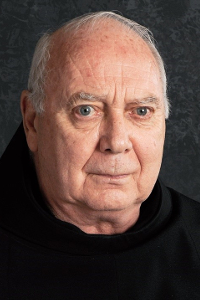 Fr. Alvin entered the Franciscan Friars Conventual Novitiate in Middleburgh, NY, in August of 1951, professed his Temporary Vows on August 17, 1952, and professed his Solemn Vows on September 17, 1955. He was ordained to the priesthood on February 8, 1958, in Albany, NY. Besides attending Anthony-on-Hudson in Rensselaer, NY, where he received an M.Div., he also received an M.A. in Education from St. Bonaventure University, in 1964.

The first assignment after Ordination for Fr. Alvin was at St. Francis High School, on Staten Island, NY, where he taught and also served as Principal, from 1958 to 1968.  He was then transferred to St. Joseph Church, in Endicott, NY, where he served as Parochial Vicar, until 1973.  Fr. Alvin worked at Covenant House in New York City from 1973 to 1975, serving as a House Parent.  The ensuing years saw him serve as Pastor of St. Francis Parish, in Bridgeport, NY (1976-1982), of St. Bartholomew Parish, in Camden, NJ (1982-1988), of Our Lady of Angels Church, Albany, NY (1988-1997 and 1998-2001), and of Blessed Sacrament Parish, Burlington, NC (1997-1998).  Starting in 2001, Fr. Alvin assisted in various ministries in the Albany area, until in 2005, he became the Chaplain to the Resurrection Sisters in Castleton, NY. He continued to serve the sisters until 2012, when Fr. Alvin was assigned in retirement to Immaculate Conception Friary, Albany, NY. He transferred in 2018, to Our Lady of the Angels Care Center, in Enfield, CT.  His death came at St. Francis Hospital, Hartford, CT on August 19, 2020, a few days after suffering a suffering a stroke.

Fr. Alvin will lie in state from on Saturday, August 22, 2020, from 9-10:45 a.m., with the Funeral Mass to follow, at 11:00 a.m., at St. Vincent de Paul Church, 900 Madison Ave, Albany, NY 12208. If you plan on attending, please register with the church at www.stvincentalbany.org , click on CLICK HERE to register for Mass/Funeral, and complete the form under Mass and Communion Service Sign-up in the left margin.  Otherwise please arrive early to register.  Interment will be in his family plot, at Calvary Cemetery in Glenmont, NY.  Memorial Donations may be made to the Franciscan Education Burse, 12300 Folly Quarter Rd., Ellicott City, MD, 21042.  To leave a message of condolence for the family, please visit www.HansFuneralHome.com .

Ordained to the Priesthood: February 8, 1958

A Certified Celebrant is a person who is trained and certified to meet the needs of families during their time of loss.  A Celebrant serves by providing a funeral service that is ...  END_OF_DOCUMENT_TOKEN_TO_BE_REPLACED