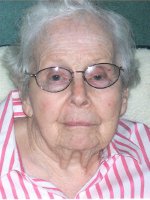 ALBANY – Ramona Lauder Hart, 90, of Albany, passed away peacefully at the Teresian House on Tuesday, December 18, 2012.  Mrs. Hart was born in Canandaigua, the daughter of the late John Adair Lauder and Elizabeth French Lauder.  She was raised in Victor, but lived most of her life in the Albany area.  She was employed by the Bausch & Lomb Co. in Rochester, and also worked as a beautician.  She was later employed at St. Peter’s Hospital in Albany until her retirement.  She was a longtime member of the McKownville United Methodist Church.

Mrs. Hart was predeceased by her husband Robert Harlan Hart.  She is survived by her children Sally A. Hart of Albany, Barbara J. Hart of Guilderland, Pamela R. Hart of Schoharie, and David L. Hart (Gloria Rosko Hart) of Rotterdam Junction; her sister Dorothy Dudley (Richard) of Fairport; her sister in law Jean Lauder of Fairport; her brother in law Malcolm R. Blakeslee of California; her grandchildren Kelsey and Conor Hart; and by many cousins, nieces and nephews.  She was predeceased by her brothers Donald Lauder and his wife Mary, and John Lauder, and by her sister Thelma Blakeslee.

The Hart family would like to express their appreciation to the staff of the Teresian House for the loving care they provided to Mrs. Hart.

A memorial service will be held in the McKownville United Methodist Church, 1565 Western Ave., Guilderland, on Saturday at 11:00am.  Relatives and friends are invited.  Interment will be in the Gerald B. H. Solomon Saratoga National Cemetery.  The family suggests memorial contributions the Teresian House, 200 Washington Ave. Ext., Albany, NY 12203, or to a charity of your choice.  Arrangements have been entrusted to the Hans Funeral Home, Albany.  To leave a message of condolence for the family, send a sympathy card, or obtain directions to the church, please visit www.HansFuneralHome.com.

Offer Condolence for the family of Ramona L. Hart

A Certified Celebrant is a person who is trained and certified to meet the needs of families during their time of loss.  A Celebrant serves by providing a funeral service that is ...  END_OF_DOCUMENT_TOKEN_TO_BE_REPLACED