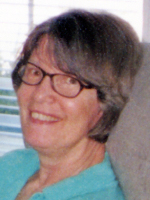 ALBANY – Priscilla (Jill) Shepard Belser passed away on Sunday, August 28th at her home in Albany, NY. Born August 12, 1943, in Xenia, Ohio, Jill was the oldest child of John and Suzanne Shepard. She spent most of her early life in California, moving to upstate New York with her family in 1960, graduating from Saratoga High School in 1961. She married in 1962, and raised three children, living in Lexington, Kentucky, and later in Saratoga Springs.

Jill helped to establish the Rape Crisis Hotline in Saratoga Springs in the 1970’s, and later worked for many years at Four Winds Psychiatric Center. She earned a BA degree from Empire State College with concentrations in Psychology and Sociology.

Her enthusiasm for food and cooking led her to establish FE Bunter Greengrocer in Saratoga the early 1980’s, and she was a skilled cook, with a special interest in the food of southern India.

Jill had a keen intellect, and was an avid reader and puzzle solver. Conversations with Jill were full of fresh perspectives and questions, and lightened by her wit and humor. Friends and family will miss the honesty, wisdom, and generosity that guided her in her own life, as well as in her role as supporter and problem-solver for the people she cared about.

Pre-deceased by her father in 1980, her mother in 2010, and her husband Joseph Belser in 1999, Jill is survived by her sons Peter and Michael Burbank, her daughter Kathy Burbank, her son-in-law Steve Wacksman, and her grandchildren Michaela, Zack, Conner, Madison, and Allison. She is also survived by her sisters Margie Shepard, Judy Waldera (Tom), and Rebecca Shepard (John Battenfield), and her brother John Shepard (Eileen).

Jill volunteered as a bereavement counselor with Hospice, and was a Hospice patient through the last eight months of her life. Her family requests that in lieu of flowers, donations be made in her name to Community Hospice of Albany at 445 New Karner Road, Albany, NY, 12205. There will be a private service at a later date.  To leave a message of condolence for the family, please visit www.HansFuneralHome.com.

Offer Condolence for the family of Priscilla (Jill) Shepard Belser

A Certified Celebrant is a person who is trained and certified to meet the needs of families during their time of loss.  A Celebrant serves by providing a funeral service that is ...  END_OF_DOCUMENT_TOKEN_TO_BE_REPLACED