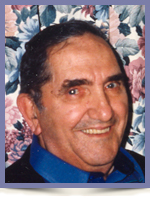 LATHAM – Andrew J. Pezzulo, 90, of Latham, died Saturday, May 30, 2009 at St. Peter’s Nursing and Rehabilitation Center. Mr. Pezzulo was born in Albany, and lived in the area all his life. He served in the U.S. Army during World War II in the European and Pacific Theatre. He attended Siena College, and was employed for many years by the New York State Dept. of Taxation and Finance. He also was a baseball umpire, and a member of the Capital District Baseball Umpires Association.

Funeral services will be held in the Hans Funeral Home, 1088 Western Ave., Albany, Wednesday at 12:00 noon, and from there to Christ the King Church, Sumter Ave., Guilderland at 1:00 p.m. Relatives and friends are invited, and may call at the funeral home Tuesday from 4-7 p.m. The parish family of Christ the King Church will gather at 4:00 pm for a service of prayer and remembrance. All are welcome. Interment will be in St. Agnes Cemetery, Menands. Those who wish may make a memorial contribution to the “Beacon of Hope Scholarship Fund” Catholic School Office in c/o Nicki Pezzulo, 40 North Main Avenue, Albany, NY 12203.

Offer Condolence for the family of Andrew J. Pezzulo

A Certified Celebrant is a person who is trained and certified to meet the needs of families during their time of loss.  A Celebrant serves by providing a funeral service that is ...  END_OF_DOCUMENT_TOKEN_TO_BE_REPLACED