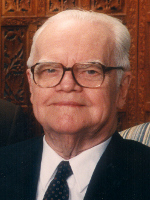 ALBANY – Paul E. Reynolds, 97, of Albany, died Monday, August 16, 2010 at St. Peter’s Nursing and Rehabilitation Center.  Born in Albany June 29, 1913, he was the son of the late Edward and Catherine Hughes Reynolds.  He was a graduate of Christian Brothers Academy, class of 1931, and enlisted in the U.S. Marine Corps at the beginning of  World War II in February 1942.  During the war he served in the battles of Guadalcanal, Cape Gloucester, and Peleliu Island, where he was wounded and later awarded the Purple Heart.  He was employed by the Albany Garage for 27 years, and by Albany Appliance Distributors for 27 years.  He retired in 1989.  Mr. Reynolds had a great devotion to Our Blessed Mother and the Rosary.  He was a communicant of the former Holy Cross Church in Albany.

Mr. Reynolds was predeceased by his wife Catherine Cassidy Reynolds, and his sister Rita Reynolds Manderville.  He is survived by his beloved son Paul E. Reynolds, Jr., and by several nieces, nephews, and grand nieces and nephews.

Funeral services will be held in the Hans Funeral Home, 1088 Western Ave., Albany, Friday morning at 8:45, and from there to All Saints Catholic Church (formerly St. Margaret Mary’s Church), Homestead St., Albany at 9:30.  Relatives and friends are invited, and may call at the funeral home Thursday from 4-7 p.m.  Interment will be in Our Lady Help of Christians Cemetery, Glenmont.  Those who wish may make memorial contributions to All Saints Catholic Academy, 10 Rosemont St., Albany, NY 12203.

The family of Mr. Reynolds would like to express their deep appreciation to the staff of St. Peter’s Nursing and Rehabilitation Center for the fine care they gave him during his stay.  To leave a message of condolence for the family or obtain directions to the funeral home, please visit www.HansFuneralHome.com .

Offer Condolence for the family of Paul E. Reynolds

A Certified Celebrant is a person who is trained and certified to meet the needs of families during their time of loss.  A Celebrant serves by providing a funeral service that is ...  END_OF_DOCUMENT_TOKEN_TO_BE_REPLACED