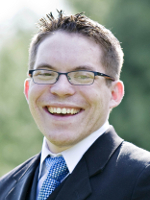 ALBANY – Nicholas “Nick” Birchak, 27, passed away unexpectedly Wednesday, August 24, 2011 due to complications from Epilepsy.  Nick was born in Grand Junction, Colorado and spent his lifetime spreading kindness, good will, and optimism in spite of his ongoing battles with epilepsy and visual impairments. Nick was a 2002 graduate of Shaker High School where he was Captain of the wrestling team and named “Bison of the Year.” He was also a world record holder, and world champion in powerlifting. Nick earned a Bachelors and a Masters degree from The College of Saint Rose where he was a leader in student activities and named “Programmer of the Year.”  He also represented St. Rose in the collegiate weightlifting championships where he placed fourth in the nation in Olympic style weightlifting.  For those who knew Nick, he lived a life of no regrets and had an unparalleled passion for possibilities.  His spirit of generosity was also recognized as he was given awards from the NY Governor’s office and the Attorney General, including the Triple C award for Commitment, Character, and Courage.  Nick was a lover of life and a gifted photographer, ablindperspective.com.  He also had many families.  He deeply loved his St. Rose family, his dance family, and his Apple family.   As a talented Lindy Hop swing dancer, Nick DJ’d, taught dance lessons, and placed third in the Beantown swing dance competition.  He lived to be with his fellow dancers.  Nick was a member of the Apple family as a specialist in disabilities.  He was happiest when he was assisting others who had disabilities and he never missed an opportunity to educate others about epilepsy. Nick’s positive energy and inspiration was a gift to every life he touched.  He will be missed greatly by his parents, Steve and Laura (Annie), his brother Brandon, his grandparents, extended family, and many friends.

Thursday, September 1, at 3:00 there will be a memorial service celebrating his extraordinary life.  It will be held in Saint  Joseph Hall, on the campus of The College of Saint Rose in Albany. Memorial contributions can be made to the Epilepsy Foundation of Northeast New York for scholarships in his name http://old.epilepsyfoundation.org/local/efneny/ .  Arrangements have been entrusted to the Hans Funeral Home.  To leave a message of condolence for the family, please visit www.HansFuneralHome.com .

Offer Condolence for the family of Nicholas J. Birchak

A Certified Celebrant is a person who is trained and certified to meet the needs of families during their time of loss.  A Celebrant serves by providing a funeral service that is ...  END_OF_DOCUMENT_TOKEN_TO_BE_REPLACED