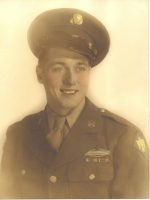 ALBANY – Morgan B. James, Sr., 84, of Albany, died Thursday, October 8, 2009 at the Stratton DVA Medical Center in Albany.   Mr. James was born in Albany and lived here all his life.  He served in the U.S. Army during World War II as a machine gunner with the 179th Infantry Regiment of the 45th Infantry Division.  He landed at a beach head in Anzio, Italy, and moved on to Rome, Southern France and Germany, and was awarded the Purple Heart for injuries received in battle.   He worked as an electrician for many years and was a member of the IBEW Local 724/236 for over 60 years.  A dedicated family man, his family was the center of his life.  He and his family enjoyed camping at Fish Creek Pond.  He was a life member of the Boyd Hilton VFW Post 7062, and the American Legion Post 977 of Altamont.  He also was a member of the William J. Lasch DAV #10, AARP #78, and the Local 724 Retirees Club.

Funeral services will be held in the Hans Funeral Home, 1088 Western Ave., Albany, Monday morning at 10:00.  Relatives and friends are invited, and may call at the funeral home Sunday from 4-7 p.m.  Interment will be in Memory’s Garden, Colonie.  In lieu of flowers, memorial contributions may be made to the Alzheimers Association of NENY, 85 Watervliet Ave., Albany, NY 12206.   To leave a message of condolence for the family, view or print a prayer card, or obtain directions to the funeral home, please visit www.HansFuneralHome.com.

Offer Condolence for the family of Morgan B. James, Sr.

A Certified Celebrant is a person who is trained and certified to meet the needs of families during their time of loss.  A Celebrant serves by providing a funeral service that is ...  END_OF_DOCUMENT_TOKEN_TO_BE_REPLACED