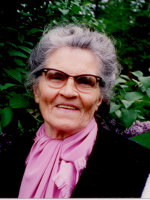 CRARYVILLE – Milda Betins (ne Jankowskis) died peacefully at Pinehaven Nursing Home on April 30,       2013 following complications from a fall.  She was surrounded by her family.  Milda was born in Vidzeme, Latvia on November 19, 1919, the eldest daughter of Janis and Emilja Jankowskis (ne Bambis).  After graduating Priekulu Vidusskola in 1938 Milda went on to attend nursing school in Riga.  During World War II Milda worked with the Red Cross as a nurse.  In 1945 she arrived as a ‘displaced person’ in Lubeck, Germany after fleeing the Soviet takeover of Latvia.   It was here that she met her future husband Laimonis Betins; they were married in October 1948.  In 1951 Laimonis and Milda moved to another refugee camp in Lille, France where they remained until they emigrated to the United States on July 7, 1956.   Laimonis and Milda made their home in Babylon, Long Island until 1991 when they retired to Lakehurst, New Jersey where they lived until 2007.  That year they moved to Craryville, New York to be closer to their daughter, Ilze Earner.  Milda lived with her daughter until a week before her death.

Milda Betins was an independent, outspoken woman who had many passions in her life – she enjoyed writing short stories for the Latvian newspaper “Laiks” and in 1977 a compilation of her stories and vignettes was published by Gauja Apgads.  Milda was reknowned for her skill in flower gardening.  She loved to travel.  She was an avid reader, especially of mystery novels and also derived great pleasure in writing letters to friends and family throughout her life.

Milda Betins is survived by her son, Hans Betins and daughter Ilze Earner; daughter-in-law Linda Betins, son-in-law Laurence Earner and grandchildren Michael and Stephan Betins, Zigis Switzer, Maize and Kristine Earner.  Milda has two great-grandchildren, Tyler and Ryan Betins.  She was predeceased by her brother, Janis Jankowskis and her sisters, Anna Graholska and Tekla Jankowskis.  Milda’s husband Laimonis Betins died on October 13, 2011.  A memorial will be planned by the family at a later date.  In lieu of flowers, donations in Milda’s name may be made to the Red Cross. To leave a message of condolence for the family or send a sympathy card, please visit www.HansFuneralHome.com.

Offer Condolence for the family of Milda Betins

A Certified Celebrant is a person who is trained and certified to meet the needs of families during their time of loss.  A Celebrant serves by providing a funeral service that is ...  END_OF_DOCUMENT_TOKEN_TO_BE_REPLACED