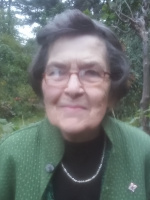 As a farm child during the Great Depression, Mary Lou developed frugality coupled with great generosity, a dry sense of humour and a love for cats. She would occassionaly ski on local hills or travel to nearby lakes for swimming. She had access to horses and sometimes rode with her much admired sister Elizabeth who was a skilled equestrian

After graduating from Bethehem Central High School, Mary Lou worked at Montgomery Ward and a bank before finding her calling and entering Albany Memorial Nursing school. Friendships with her classmates sustained her social life as she attended almost every one of her alumni functions and stayed in touch with her classmates.  At the wedding of friends Ginny and the late Bud Scheibly, Mary Lou met William Faunce Bulnes and they were married on  May 7, 1955. 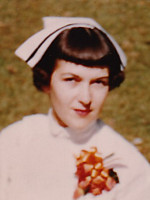 h her loving husband, she raised three children until William’s untimely death when Mary Lou became a single working mother. She transitioned from hospital work as a registered nurse to assisting instructors at the Albany School for Practical Nursing. She enjoyed the final decades of her nursing career meeting a variety of capital district residents recording medical history and vital signs for insurance physicals.  Mary Lou instilled  her scientific curiosity and appreciation for the arts in her children. She volunteered with and enrolled her kids in the Helderberg Workshop. Her volunteering spirit was also evident through her efforts assisting the Red Cross, Capital City Rescue Mission, and the Town of Bethlehem Historical Association. An avid gardener, Mary Lou spent much time tending to her yard & plants and also volunteered at Good Samaritan nursing home planting ornamentals.

During the 1970s, her life of service to people transformed to one of service to God when she accepted Jesus Christ into her heart as Lord and Savior. Her faith was strengthened through fellowship at the Bethlehem Reformed Church and other local church services and meals.

Most recently, her inherently pleasant nature was bouyed by new friends at Rosewood Rehabilitation and the tender care of staff at Rosewood is greatly appreciated by the family.

Memorial service arrangements to be determined. Any gifts in Mary Lou’s memory may be made to any of the above named charitable organizations.  To leave a message of condolence for the family, please visit www.HansFuneralHome.com.

Offer Condolence for the family of Mary Lou Bulnes

A Certified Celebrant is a person who is trained and certified to meet the needs of families during their time of loss.  A Celebrant serves by providing a funeral service that is ...  END_OF_DOCUMENT_TOKEN_TO_BE_REPLACED