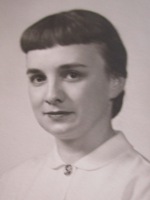 Martha Ward Carver, 88, grew up in Deposit, New York and graduated from Skidmore College in Saratoga Springs, NY in 1947 with a degree in public school music, as it was then called. She served as Supervisor of Music in the elementary and junior high schools of Greenfield, Mass from September of 1947 to June of 1955.

She returned to Skidmore College in the fall of 1955 to join the Music Department faculty, implementing the music education program. After fifteen years at Skidmore she chose to leave the campus in favor of domestic life on the farm.

Martha was a long-time friend of the Festival of Baroque Music and attended performances every year from its beginning in 1959 to its final season in July of 2011. She was a member of the Saratoga County NAACP, and SEAD (Saratogians for the Equality and Acceptance of Diversity). Ms. Carver left over one hundred acres of farmland to Saratoga PLAN.

Ms. Carver is predeceased by her husband, Frank Carver, originally of Milo, Maine, and her brother Charles (Chuck) E. Ward of Ballston Spa, NY, and is survived by her stepson, Robert J. Carver of Nokomis, Florida; her foster son, Michael Spiak and his wife Kelly of Greenfield Center, NY; nieces and nephews Susan Ward of Catskill, NY; Braden Ward of Oneonta, NY; Mary Jane Benenati of Norwich, NY; Mark Ward of Walton, NY and cousin M. Edward Hartz of Wilmington, NC in addition to a loyal support group of friends and neighbors as well as her faithful and beloved dog Macy.

At Martha’s request there will be no funeral service. She has donated her body to the Anatomical Gift Program at Albany Medical Center.

Memorial contributions may be made to the Deposit Educational Endowment Program (DEEP), Deposit, NY, 13754 or the Yellow Rose Fund, Skidmore College, 815 North Broadway, Saratoga Springs, NY, 12866.  To leave a message of condolence for the family or obtain directions to the funeral home, please visit www.HansFuneralHome.com.

Offer Condolence for the family of Martha Ward Carver

A Certified Celebrant is a person who is trained and certified to meet the needs of families during their time of loss.  A Celebrant serves by providing a funeral service that is ...  END_OF_DOCUMENT_TOKEN_TO_BE_REPLACED