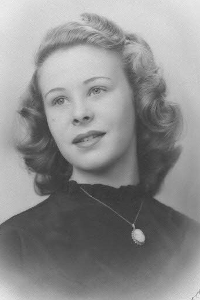 PRINCETOWN – Martha M. Proper passed away on April 16, 2021 at the age of 92.  Martha was born in Norwood, Pennsylvania on October 4, 1928 to the late Robert and Martha Cambage.  Soon after her father finished his job training, they moved to Schenectady County where Martha’s sister and brother were born and where Martha lived the rest of her life. Martha attended a little two-room school house on Pangburn Road close to where her parents settled to raise their family.  She remembers the boys in school having to collect drinking water in pails from the nearby spring and how she enjoyed helping her teacher assist with teaching her classmates. It was apparent at a very young age that Martha developed a love for learning. From there she attended Draper School as a freshman. She often talked about how she met Gene, her future husband the first day of school. She graduated from Draper School in 1945 and soon started her first job at GE as an engineering assistant in the Steam Turbine Department. On June 27, 1948 Martha married her school sweet heart Walter Eugene Proper better known to all as Gene. They built their house on Pangburn Road a few hundred feet from the two room school house and next door to her parents. Martha stopped working in 1951 to begin raising her two sons Robert Eugene and John Raymond. In 1962 she had the opportunity to become a Schenectady County Representative for the NYS Citizens Information Service Executive Office. She felt honored to have this position as it afforded her the opportunity to do some important work with the current governor Nelson A. Rockefeller. In 1968 she started volunteering as the assistant director of the Schenectady County Narcotic Guidance Council and Drug Information Center and in 1972 was promoted to the position of director. She continued working there as a volunteer until 1977. Finally, in 1978 after working full time as a volunteer for 9 years Martha was offered a paid position as director of the Schenectady County Drug Abuse Prevention Council where she worked until she retired in 1990. Martha was very dedicated to her work and she was committed to the cause of helping families win the fight against drug addiction and to make Schenectady a better place for families to live, work and raise their children.

She was destined to work in the human service field where she could help others. It was her joy and passion in life to work with people. In addition to her full-time job she was involved in her sons’ school and in her hometown of Princetown where she supported the town board members in any way she could. People who knew Martha knew her as someone who cared deeply about family, friends and neighbors and she believed in the importance of being a good neighbor.  After retirement Martha and Gene enjoyed 18 years of traveling in their motorhome to Florida every winter and to other areas of the country during the summer months. Traveling gave them the opportunity to have lots of fun, meet wonderful people and establish lasting friendships along the way.

The Proper family would like to thank all the staff at Wilkinson RHCF and at the Amsterdam Community Hospice for their love and care.

Memorial donations may be made in Martha’s memory to the Schenectady City Mission.  Burial will be held privately.  To leave a message of condolence for the family, please visit www.HansFuneralHome.com .

Offer Condolence for the family of Martha M. Proper

A Certified Celebrant is a person who is trained and certified to meet the needs of families during their time of loss.  A Celebrant serves by providing a funeral service that is ...  END_OF_DOCUMENT_TOKEN_TO_BE_REPLACED