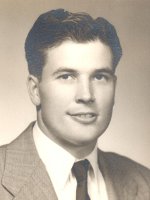 ALBANY – Mark A. Delamater, 90, of Albany, passed away Tuesday, June 9, 2015 in the Hospice Inn at St. Peter’s Hospital.  Mark was born and raised in Portsmouth, OH, the son of the late Ralph E. and Inez H. Potts Delamater.  He served in the U.S. Navy during World War II, including service aboard the USS Sanders, DE-40.  He then attended the University of Ohio, and earned a degree in Electrical Engineering from Rensselaer Polytechnic Institute in 1952.  During his career as an engineer, he was employed by Westinghouse, General Electric, Honeywell, ALCO, and the New York State Dept. of Environmental Conservation (ENCON).  He loved playing sports, especially tennis, softball and basketball, and played tennis until age 86.  He also built a four bedroom home, mostly by himself, on Copake Lake.

Mark is survived by his beloved wife Ruth E. Olsen Delamater; his daughters Carol Young (Carl) of Albany, Maryann Ten Eyck of Schenectady, and Susanne Witkop (Jerry) of Albany; his grandchildren Rachel Young, Andrew Ten Eyck, Michelle Ten Eyck (Gary Miles), and Joshua, Sean and Matthew Witkop; his great grandchildren Alyssa and Casey Miles, and Dakota Ten Eyck; and by several nieces and nephews and their families.  He was predeceased by his brother and sister in law Sherwood F. and Janet Delamater.

Funeral services will be held in the Hans Funeral Home, 1088 Western Ave., Albany, Friday morning at 8:15, and from there to All Saints Catholic Church, 16 Homestead St. (behind CVS), at 9:00.  Relatives and friends are invited, and may call at the funeral home Thursday from 4-7 p.m.  Interment will be in the Gerald B. H. Solomon Saratoga National Cemetery on Monday, June 15th, at 12:00 noon. The family suggests memorial contributions to the Alzheimer’s Association Northeastern New York, 4 Pine West Plaza, Suite 405, Albany, NY 12205.  To leave a message of condolence for the family or obtain directions to the funeral home, please visit www.HansFuneralHome.com.

Offer Condolence for the family of Mark A. Delamater

A Certified Celebrant is a person who is trained and certified to meet the needs of families during their time of loss.  A Celebrant serves by providing a funeral service that is ...  END_OF_DOCUMENT_TOKEN_TO_BE_REPLACED