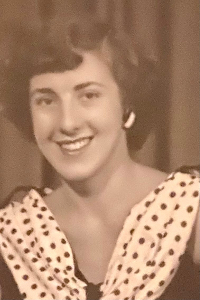 MECHANICVILLE – Marie E. Anderson of Mechanicville passed peacefully into the Lord’s arms on Wednesday, July 6, 2022. She was 92. She was fondly called Marelly by her friends.  Marie was born in Albany, the daughter of the late Elizabeth and Philip Sattler. She graduated from Philip Schuyler High School, Albany in 1947, and shortly after she enlisted in the military serving in the Army WAC in Japan.  Following her military service she began her career at Riddle Airline in Florida.  She earned degrees from Hudson Valley Community College and SUNY Albany, and held several jobs in the Capital District including administrative assistant at the New York Legislature and at Albany Medical College.  Marie enjoyed traveling, world history and classical music. She was always up for a good political discussion.

Marie was predeceased by her brother Adam Sattler, and her nephews Adam and Bryan Sattler.  She is Survived by her husband Roger Anderson; her sister Elizabeth James; her nieces and nephews Carol Benson (Robert) of Long Lake, William James (Andrea) of Butte, Montana, Rita Jones (William Lieberman) of Port Orange, Florida, and Philip James of Guilderland.

Special thanks go to Michael and Cayelan Morris who lived with and cared for Marie. Also to the staff of the VA Homebound Clinic, especially Dr Phillips for her care and compassion.

A committal service will be held at the Gerald B. H. Solomon Saratoga National Cemetery, 200 Duell Rd, Schuylerville, NY 12877 at 1:00 p.m. on Friday, September 16, 2022.  Relatives and friends are invited.  To leave a message of condolence for the family, please visit www.HansFuneralHome.com.

Offer Condolence for the family of Marie E. Anderson

A Certified Celebrant is a person who is trained and certified to meet the needs of families during their time of loss.  A Celebrant serves by providing a funeral service that is ...  END_OF_DOCUMENT_TOKEN_TO_BE_REPLACED