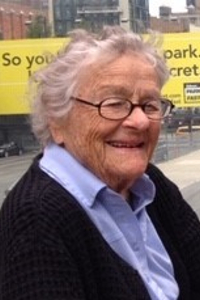 DELMAR – Margaret “Peggy” Slocum, age 99, passed away peacefully on Sunday Feb. 9, 2020, surrounded by friends and family. She was born on Oct. 18, 1920, in Plainfield, NJ. Growing up, she and her four siblings lived in Florida, Indiana, Ohio and Illinois, as their large family moved with her father’s employment. She married John H. Slocum in 1941, and received a BA degree from the University of Chicago in 1942, and an MA in Education from the University at Albany in 1961. In the 1960s, Peg was a social studies teacher in public and private schools in Albany. Before teaching, she was a volunteer leader in the NYS League of Women Voters voting rights campaign for permanent personal registration. After her divorce in 1967, Peg moved to Japan and later, China, where she taught English at the college level from 1969 to 1990. After returning to Albany in 1990, she continued to teach English as a Second Language to newly arrived refugees at the International Center and to foreign students at the University at Albany, as well as the College of Saint Rose and Union College. Retiring in 2006, she was an active member of the First Unitarian Society of Albany; she spent several months teaching at the Unitarian Society’s partner church in Romania.

Peg’s daughter Sara Slocum sadly died in 1995. Survivors include a son Peter Slocum and daughter-in-law Ann Sayers, of Keene, NY; granddaughters Emily Slocum (Doug Cubberley) of Nashville, TN, and Molly Slocum Smith (Mark) of Darby, MT; her two great-grandchildren Stella and Lukas Smith; as well as numerous nieces and nephews. The family would like to express particular thanks to the Community Hospice team and the wonderful, caring staff at Kenwood Manor in Delmar for their kindness and compassion during the last few months of her life. A memorial service is being planned for the spring. Donations in Peg’s memory may be sent to The First Unitarian Society of Albany, the Community Hospice of the Capital District, or to the charity of your choice.  To leave a message of condolence for the family, please visit www.HansFuneralHome.com.

Offer Condolence for the family of Margaret W. Slocum

A Certified Celebrant is a person who is trained and certified to meet the needs of families during their time of loss.  A Celebrant serves by providing a funeral service that is ...  END_OF_DOCUMENT_TOKEN_TO_BE_REPLACED